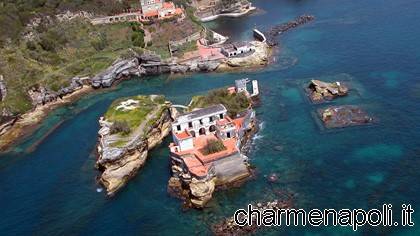 Forty-two acres of land and sea … that extend from the Bay  of Marechiaro to the ancient village Trentaremi in Posillipo . A small piece of paradise that lies in the heart of Naples. If you have not guessed the identity of this wonderful place , you just have to go there in person to see live his incredible charm and get lost before the enchantment that only the hill of Posillipo, with the underwater park of Gaiola, are able to offer . A park , exactly. Covered by the waves of the sea , that contains archaeological finds of rare beauty once linked to the promontory near the ancient Greeks founders of Partenope baptized with the name of Pausilypon , ” Breath from the pain .”

A “slice” of the coast as valuable as the brightest pearls transformed , since 2002, in a marine protected area under the protection of the Ministries of the Environment and Cultural Heritage . And then , since 2004, the subject of a project to upgrade and enhance interdisciplinary studies carried out by the Centre Gaiola non-profit organization in collaboration with the Archaeological Superintendence of Naples and Pompei. Since then 10 years have elapsed , during which the promontory of Posillipo and the park of Gaiola, with its famous island , were elected unanimously by citizens and tourists as a valuable asset to be preserved to preserve at all costs . A well that is characterized by a large area of Mediterranean bathed by the sea , for the ancient relics submerged to the ruins of the theater  belonged to the Roman freedman Publio Vedio Pollione of the first century a.c. , the gentle slopes of the hill down to the sea , the Archaeological Park of Pausilypon and the high cliffs of Neapolitan yellow tuff .

Ten years have passed in vain saw what was done for the re-launch of this extraordinary cultural and natural treasure chest of Partenope . And to celebrate the first decade of operation, the CSI Gaiola, with the City of Naples , has compiled a calendar full of events , activities and events , including the underwater park of Gaiola and the Archaeological Park of environmental Pausilypon : a mix of art , science , nature and history to get to know a unique heritage of the city of Naples. A true calendar of guided visits and appointments, already presented with success over the past years.

It starts in March and April , with the educational project ” The seas of Naples” , now in its ninth year and every year has the participation of more than 3 thousand students from schools of all levels , led to the discovery of the beauties of the coast of Naples .
It continues until May 2014 with the “May Gaiola “ : a series of scenic routes by land and by sea with snorkeling and scuba diving, to find out the specifics of the ancient underwater archaeological site .
Also in the spring will also return the review ” Suggestions dusk “, the event now in its sixth edition , with performances by archeology, nature , music and theater to entertain visitors from dawn until sunset in the evening, in the suggestive setting of the Cave of Seiano .

Last year, the events in the billboard showed a considerable audience participation and the many guests who visited the exhibition park of Gaiola, include nothing short nonetheless that the members of the royal family of Belgium Albert II and Paola Ruffo di Calabria. Source of pride for the organs of the organizing committee that has always been active also in the capital. Not by chance in the summer will be renewed collaboration with the Center multipurpose St. Francis of Assisi Marechiaro that welcomes kids for years in terms of social disadvantage , to spend a week of fun in the city and learn about the wonders offered by your sea.

The initiatives are taking place without really stopping , until you get to 17 November 2014, a date that falls on the tenth birthday of the center’s activities posillipino of Interdisciplinary Studies , to celebrate the best achievements in this time period. The program includes scientific and cultural events , exhibitions , seminars , screenings and days of cleaning and celebration, which will involve the whole city .

“The seas of Naples”
“May Gaiola”
“Suggestions dusk”