Home Routes Game of the Resonances in the ruins of Pompeii 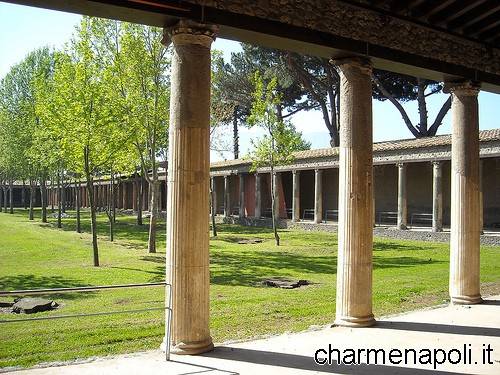 Inaugurated this morning in the presence of Minister Dario Franceschini, the “Game of Resonances“, the new site-specific sound installation art for the Great Palestra of ruins of Pompeii (south side), designed by Michelangelo Lupone and Laura Bianchini and created by CRM – Centro Ricerche Musicali of Rome. The installation, commissioned in 2009 by the CRM, was implemented as part of the extensive restoration of the Great Gymnasium of Pompeii, which closed to the public since 2008, they reopened its doors today to the public on a proposal to visit the original It offers the chance to enjoy the spaces of the large building as it was in its original form and at the same time to enjoy the same as used for the Museum’s permanent exhibition area, as well as temporary.

The extraordinary frescoes of complex Moregine, so far exhibited in international exhibitions, are in the south porch of the gym their final, prestigious location. Here the CRM – for almost thirty years in Italy pioneering center for research, creation, dissemination and scientific music with special projects intended to build, through innovative forms of music, art sites, archaeological and urban environments – has made an impressive sound installation titled “Game of Echoes”, a place of sensory experience, an immersive and interactive environment able to adapt and develop the musical form in relation to the presence of the user and the passing of time. All the expressive components of the installation are related and integrate hearing and vision, proposing a reading of the artistic site and frescoes of Moregine: “The music is based on his communicative power immaterial body of its forms of expression, and this allows you to build it often and rightly to intercultural emblem – explains Michelangelo Lupone, creator of music and the installation of Planofoni employees -. If it is designed to go into creative relationship with the public, if the rules of its development come into a constructive relationship with the ‘ environment, if his own form is renewed with the passage of time, it is possible to think that music can become a ‘space’ actualized expression, a ‘time’ sharing of suffering”.

The “Game of Resonances” presents itself as a welcoming, stimulating the temporal forms of the imagination; a non-invasive which allows the user to acquire the acoustic memory of the site with a consistent pattern of sound that enhances the architectural shapes and volumes, a space perception can stimulate in the viewer an emotional participation. The music comes from the materials that make up the space: are Planofoni Planofoni Corten steel and stainless steel, vibrating systems, consisting of panels of different materials and shapes, designed by Lupone and executed by the CRM. It is non-conventional technologies, which spread the sound with specific dependent structure of matter, the geometry of the design, by the orientations and curvatures of the surfaces occupied by plastic volumes. The Planofoni allow to give the sound the tonal characteristics of the material used and allow, by punctual irradiation on the whole surface, to draw the acoustic space in relation to the architectural space. In this way the musical form changes and evolves to the presence of the user, and in relation to the passing of time: at each change of season is renewed changing some peculiarities of timbre and rhythm.

The musical form has three different areas of intervention. The first area: “Environment” is characterized by large walls in corten located to the left and to the right of the frescoes of Moregine. In it there is provided a musical score that uses the slight vibration of the steel plates contiguous to draw Sound paths along the surfaces and obtain resonances that blend with the surrounding environment. The second and the third area, respectively, “the Man” and “The tools of his work”, are obtained in the spaces that separate the frescoes. These two environments connoted by the presence of “Planofoni ‘” stainless steel suspended ceiling, designed by the composer, whose musical score is developed respectively on the voice and the sounds of the instruments of labor, articulated polyphony that use radiation multidimensional Planofono and achieve a particular spatial sound that completely envelops the visitor.[charme-gallery]