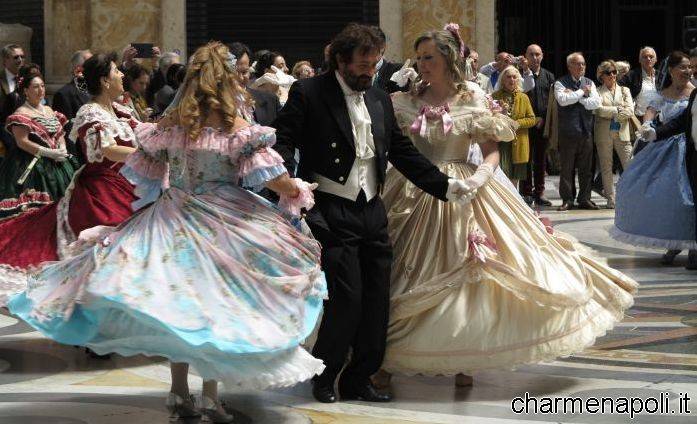 Who has not dreamed at least once in their life to be invited to a grand ball at court? By now the dream becomes a reality, thanks to the Cultural Dance Company, in collaboration with the City of Naples, Wednesday, September 17 at 20.30 will create a unique evening with the “Grand Ball at the Court Ottocentesco Angioina” in the beautiful frame of the Angevin Castle in Naples.
In the square of Castelnuovo, accompanying the circling dance, will be the voices of soprano and tenor Leontina Alvano and Gianni Baiano.
An opportunity to discover the charm and magic of times past, but still lives with the help of the company sponsoring the event, which returns to the repertoire of the best masters of the nineteenth century Ballo in putting life quadrilles, contradances, val-zer, polkas and figured mazurkas.
What better to recall the ancient glories of the past but to the historic medieval castle in Naples?
[charme-gallery]
Recall that its construction is due to the initiative of Charles I of Anjou, who in 1266 defeated the last descendant of the family Swabian, ascended the throne of Sicily and established the transfer of the capital from Palermo to the city of Mount Vesuvius.
The presence of a monarchy “external” non-resident, that is, in Naples, had set the city planning around the center of royal power, constituting, in fact, a kind of polo urban alternative, formed from the port, the first point of contact of the sovereign who landed there from Sicily, and the two main castles adjacent to it: Castel Capuano and Castel dell ‘Ovo.
Therefore, the two manors existing Angevins, once chosen Naples as their headquarters, they added the Castel Nuovo, which was not only fortification but also a grand palace that went to replace Castel Capuano, as a royal residence, in favor of a new fortress brand, built a stone’s throw from the sea.
Years later, therefore, the chest Anjou, later revolutionized by the “restyling” Aragonese, not only has preserved its beauty and its strong symbolic value, but it is enriched with the passage of time, even more so thanks to the active participation of citizens who have contributed and continue to contribute to enhancing the reputation over time.