Home Routes The pot of Assteas back home in Benevento 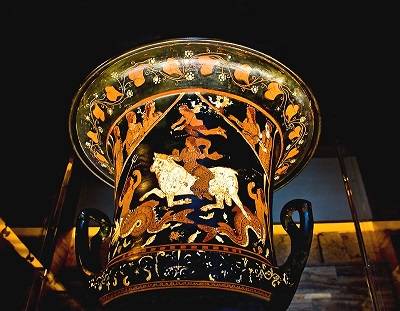 Back home the pot of Assteas depicting the “rape of Europe“, one of the most famous of ancient craters, dating from the fifth century BC by tomorrow (Friday, June 26), in fact, the precious relic returned by the Paul Getty Museum to Italy eight years ago, will be permanently placed in the restored Bourbon Tower of Montesarchio (Benevento), which is part of the National Archaeological Museum caudino (the opening is scheduled at 18). “At home in Europe. Stories of crater Assteas” is the title of the exhibition-event that is connected to the current exhibition “Imaginary Red. The Tale of pots Caudium“, where for the first time the complex mythological scenes depicted on vases found in the necropolis of Caudium are narrated with video, holography, minimapping. The initiative is made possible thanks to the collaboration between the Archaeological Superintendence of Campania, the Museums and the Regional and the Municipality of Montesarchio. The vessel was found Assteas by tomb robbers in the seventies in the Samnite necropolis of Sant’Agata de’ Goti (Benevento). After being sold by grave robbers for a million lire and a piglet, passed through the antiques market and in 1981 was bought by the Paul Getty Museum in Malibu, in California (Usa), for $ 380,000. In 2007 the crater was returned to Italy thanks to complex investigations investigation conducted by the Carabinieri Cultural Heritage Protection; has since been exhibited at the National Archaeological Museum of Paestum and housed in prestigious venues, the Quirinal Palace to UNESCO in Paris and in recent months in Sant’Agata. “We are proud of the offer of our country, a great cultural center – says Mayor Franco Damiano – and to have contributed to the reopening of the Tower of the Castle of Montesarchio, it closed for many years, which dominates the Valle Caudina and represents the monumento- symbol and it will house what has been called the world’s most beautiful vessel”.