Home Routes The Night of Plinio tells the eruption of Vesuvius 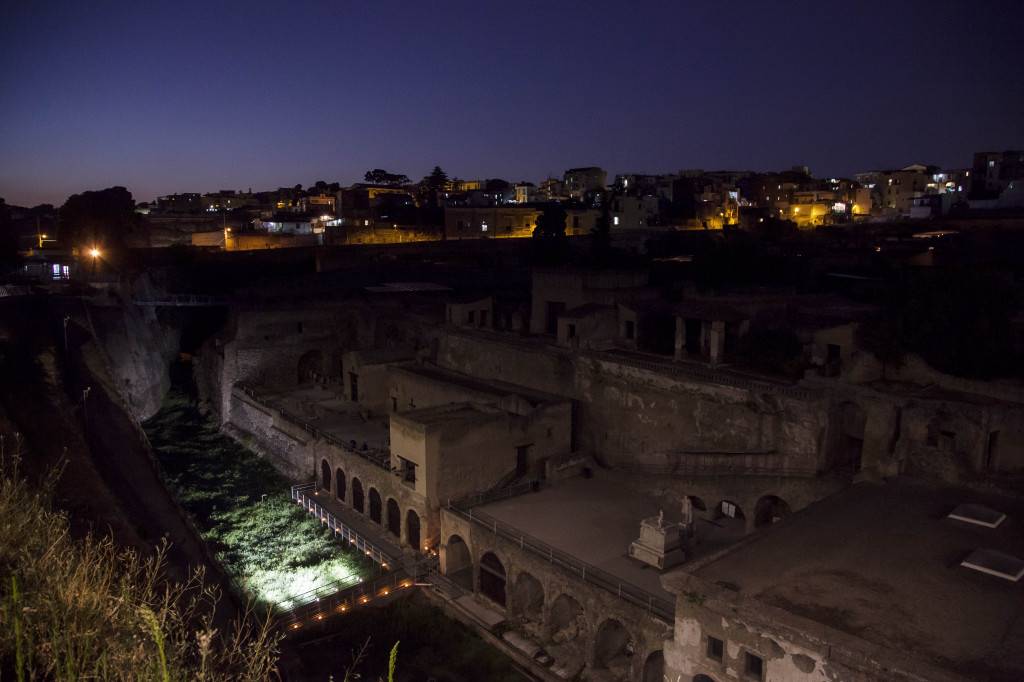 A journey in the footsteps of Plinio, following his fascination for a natural event that will be fatal. This is the underlying theme of the night tours to the ruins of Herculaneum opened last night and will continue until 13 September. “The Night of Plinio”, the title of the course, brings to life the last, dramatic night of Herculaneum, bringing visitors even in the Suburban Terme, normally closed to the public, an amazing site that retains many of the eruption of Vesuvius 79 AD environments and almost intact able to reconstruct the atmosphere of the time. The tour wrapped in the charm of the night, will retrace the hours prior to the eruption of Vesuvius and will start already in the reception areas with multimedia installations with mosaics Herculaneum, by the Virtual Archaeological Museum at Herculaneum. Accompanied by an archaeologist, the audience will enter the top of the ancient Herculaneum, visiting some of the most striking case, which the skeleton house, Casa del Salone Nero to the terrace of Marco Nonio Balbo, Roman politician much loved time for his patronage. The journey will end in the ancient thermal complex where, with a performance of theater, music and light installations, Pliny the Younger (played by Luke Iervolino) will revive – in a passionate monologue on love for knowledge – the last moments of that dramatic night in which Pliny wanted to get closer and closer to the volcano to understand its secrets. With effect from natural scenery to the representation will be the gateway all’apodyterium, the casting of solidified magma and gas has become an outstanding still image of two thousand years ago. An overnight trip, made by Scabec in collaboration with the Archaeological Superintendence special Pompeii, Herculaneum and Stabia, within the project “Travel in Campania. In the footsteps of the Grand Tour” funded by the Region of Campania, which includes 19 performances for the whole summer, each with four groups of cards (the first part at 8:30 pm, the last at 10 pm) to 30 persons. But the night of archeology in Campania is not limited to Herculaneum: from August 1 will be accessible at night at Villa Romana in Minori with the show “Imperium” Temples and the Archaeological Park of Paestum with visits dawn of the show “Lunacantastorie”.