Home Routes The ancient history of Rome is also delves in Boscoreale, Varano and... 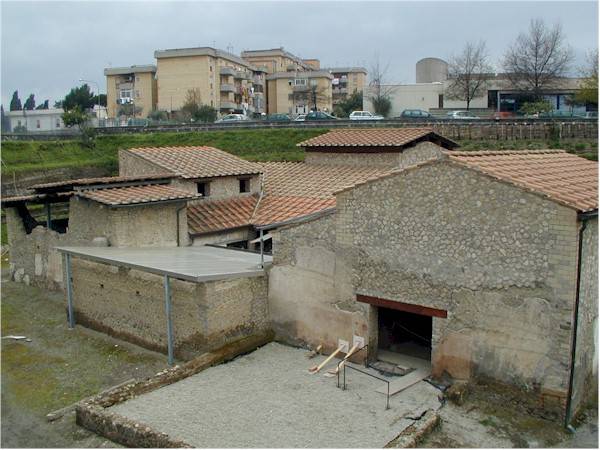 Who said that enough the ruins of Pompeii, Oplonti, Baia and Herculaneum to testify how big it was, two thousand years ago, the power of the Urbe in his possessions along the Gulf? Stabia and “ruins of Vesuvius” is a chest that is just waiting to be opened. Buds valuable as those that shine, for example, on the shelves of well known Archaeological Museum of Naples, or even at the Metropolitan Museum in New York. Do not believe us? So follow us in this “grand tour” to rediscover the hidden treasures of Rome in the Land of Partenope. From Castellammare in Boscoreale, through the treasures of the Nolan, the remains of ancient temples, magnificent villas and well-equipped rural farms, captivates even the most demanding of visitors. Just know how to look on the geographical map of the buried cities and the wonder is served.[charme-gallery]

The first stop is a must. If only for the character who has linked his name to the modern town of Octavian, on the slopes of Monte Somma. Is here, in the territorial boundaries of Somma Vesuviana, that is, in fact, an impressive Roman building whose foundations date back to the early imperial age. The structure, often buried by lava erupted over the centuries from Vesuvius, was discovered accidentally around the ’30s of the last century and later brought to light, gradually, starting in 2002, thanks to a systematic campaign of excavations promoted by’ University of Tokyo. Is likely, although there are no documents that can “certify”, be it their own residence where he died the emperor Caesar Augustus. To push this hypothesis the extraordinary nature of the building itself and its amazing monumentality.[charme-gallery]

From the slopes of Mount Somma in Boscoreale, the step is short to say the least. It is, in fact, in the circle of Commons that wind along the slopes of the crater almost to costellarlo, mo ‘crown. Boscoreale owes its name to the fact that, in the Anjou, the territory, then covered by dense vegetation, were used by the royal court as a hunting reserve. In this corner of Campania Felix, once known as Pagus Augustus Felix Suburbanus, rural suburb of the village of Pompeii, archaeologists have discovered a number of Roman villas, mostly rustic type, in which focused activities related to sheep and crops, especially cereals and screws. Only one of these, however, was completely excavated and is now open: it is “Villa Regina“, also restored following the completion in 1991 of the highly popular and rich museum Antiquarium, located just behind the excavation of which is an integral part in the visit. Antiquarium, in fact, have kept the few artefacts found in the area of Pagus. The villa of Boscoreale is rather small, with a few modestly painted environments and a wing dedicated to lararium where was found a marble statue dedicated to the god Bacchus. It is, however, a building that retains all the characteristics typical of small industry devoted to the production of wine.[charme-gallery]

The same divine nectar that will be taking place in rivers, two thousand years ago, in the villas that once dotted the ancient coastline Stabia, now known as “the hill of Varano“. We are in Castellammare where, since 1749, the archaeological excavations promoted by the House of Bourbon have uncovered a complex of buildings of incomparable beauty, in turn buried in 79 AD by the fury of Vesuvius. Compared to the closest sites of Pompeii and Oplonti, those Varano are much smaller in size, but offer a glimpse particular otium so dear to the inhabitants of the City. Those who came here to build some of their most beautiful residences. Stabia, in fact, unlike Pompeii and Herculaneum, not hosted a real city, but a well-equipped tourist village with stunning views of the Gulf. A holiday resort among the most popular at the time, in which they took shape numerous villas, decorated with ornaments of big value. Buildings with large living quarters, spa facilities, arcades and nymphs decorated superbly. Most of which still rests in the ground, as in the case of the villa called the Shepherd or Anteros and Heraclo. Are visited the Villa San Marco, which with its 11 thousand square meters of space, is one of the largest among the Roman structures in residential character of the entire coast Vesuvius; Villa Arianna, considered the oldest of the entire site, and so named for the great mythological paintings found in the wall of the triclinium and, finally, the so-called “Second complex” of Varano, flanked to the previous excavation and whose floors, removed by the Bourbon kings, decorate today the National Archaeological Museum of Naples trampled by tourists and enthusiasts accompanying them along the most fascinating of the routes to the rediscovery of the lost treasures of Rome Vesuvius.[charme-gallery]