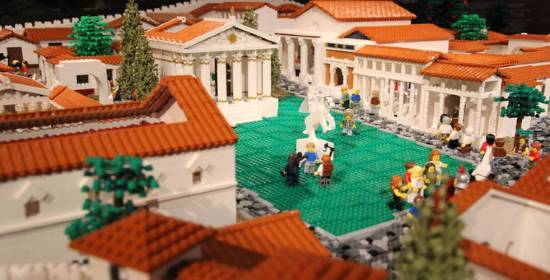 Rebuild the ancient city of Pompeii with the bricks of the buildings? No sooner said than done. The dream has been realized by a fan named Ryan McNaught, better known as “The Brickman“, which has received this special and prestigious post by Nicholson Museum di Sydney, Australia (McNaught, in the past, has already created for the same museum Lego versions of the Colosseum in Rome and the Acropolis of Athens). The news portal greenme.it in an article that explains how man has rebuilt the ancient city destroyed by the fury of Vesuvius using at least 190 000 Lego bricks. Now his creation is on %20http://www.greenme.it/display in the spaces of the prestigious Australian Museum which is enjoying great success, confirming the appeal of the Roman city of tourists and enthusiasts around the world. An appeal will remain intact even in this special … reconstruction. The city assembled from “The Brickman” shows us how Pompeii could have been before the volcano blotted from the face of the earth, in 79 AD, as it was when it was discovered in the eighteenth century and how it looks today in the eyes of visitors.
According to the Nicholson Museum, which is part of the University of Sydney, and focuses on the study of ancient cultures, that of McNaught is the largest reconstruction of an ancient city ever built until nowadays. The use of the famous colored bricks allowed to draw attention to the issue of a new audience, very young, who otherwise might not have visited the museum. And that, in all likelihood, struck by this unusual vision, want to try live the thrill of a real visit to the ruins of ancient Pompeii. [charme-gallery]