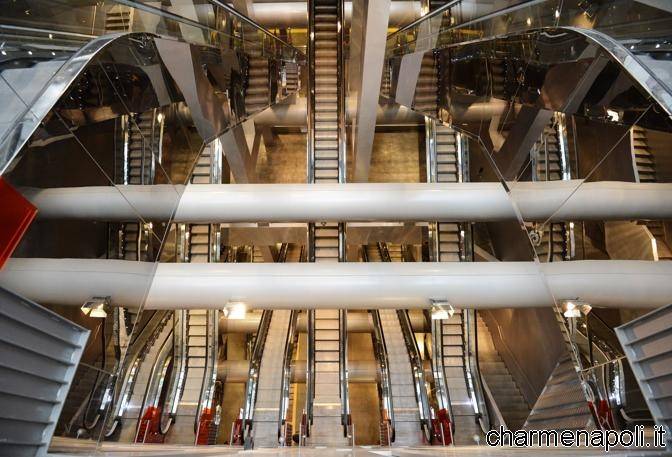 Naples as London ‘s subway dream is about to become a reality .
The CIPE(Interministerial Committee for Economic Planning ) has, in fact , gave the green light to the provision of € 636 million for the work to complete the rail segment of Naples. The project is part of the “Decree of Making “ and more specifically relates to the development of approximately 3.5 km of rail transport . It starts Monday, December 30th with the official opening to the public of the station in Piazza Garibaldi. Then, in a matter of weeks it’s up to the square surrounding ( completely restored) recur strong citizens of his new look.

With the operation of Line 1 will in fact be possible to reach , in about thirty minutes , the central station of Naples from the area Piscinola – Secondigliano , through the Aminei Hills ,Vomero , the hospital area and the city center of Piazza Dante and Toledo. Therefore a large ring connection intended to bring the hinterland with the center of the city .

Some anticipation the appearance of the complex of Piazza Garibaldi was leaked during the inauguration of the plant took place on the 2nd of December, the date of the official ribbon-cutting ceremony , attended by the mayor of Naples, Luigi de Magistris and Infrastructure Minister Maurizio Lupi . The futuristic building part of the project of the stations of Art , coordinated by Achille Bonito Oliva and bears the signature of the famous city planner French architect Dominique Perrault . Inside there are two installations of Michelangelo Pistoletto . Both revolve around the concept of “transparency and brightness .” Just think, in fact, that access to the station is via a vertical shaft whose cover is made of glass so as to allow access of natural light from the floor almost to the pier located about 40 meters deep.

Still , the presence of works entitled “Station” composed of reflective steel panels on which are depicted , size , imaginary passengers on the way, creates a striking effect to say the least .
By 2016 , however, is expected to be completed at the time of the yards are still outstanding from the Town Hall Square , the Cathedral and Line 6 of the Riviera di Chiaia .

Finally , the next step for the completion of the Naples Metro network will be the realization of the line Centro Direzionale – Capodichino Airport , expected by 2018. The future station , whose works have not yet begun , will be built in Piazza Vittorio at the former Terminal 2 to serve the entire airport area ( San Pietro a Patierno , Casoria , Casavatore , Secondigliano and San Carlo Arena ) until Piscinola district , in the extreme northern outskirts of the capital.
The municipal plan for urban mobility traces , in fact, the model of the ” Circle Line “ in London , the great British pipe in a practical and functional connection connects all districts of the city .

These interventions aim to improve on a wider scale the livability of a city that , on the model of the great cities of Europe can and must do ‘s “line of transferability town ” the flagship of services. All this in the name of rationality , efficiency and effectiveness , guidelines for a job that saw and behold, still engaged government representatives , county and municipality for the revival of Partenope .