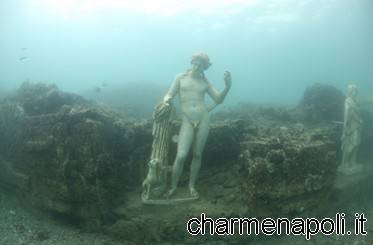 A marble statue, dating from the period between the middle of the first and second century AD, was found on the bed of the submerged park of Baia. Broken into several parts, it represents a female figure.

Ancient treasures bloom from the sea of Naples. A marble statue, probably dating from the period between the middle of the first and second centuries after Christ, was found on the seabed of the submerged park of Baia, in the Flegrean area. The Luni marble sculpture, broken into several parts, represents a female figure, headless and armless, with a peplum girt under the breast and a knitted cloak pinned with a circular brooch on her right shoulder.

Fitted at the base of a low plinth, the sculpture must have been located in a quadrangular element, which, will hopefully help identify the original setting in the now submerged imperial Palatium of Baia.[charme-gallery]

The discovery was made by the researcher Gabriel Gomez de Ayala, from the Naumacos Underwater Archaeological Research Company, a voluntary collaborator of the Superintendence for Archaeological Heritage of Naples and Pompeii and of the Institute for the Conservation and Restoration of Rome, in the context of activities for instrumental 3D measurements.

After the discovery was reported to the officer in charge of the Marine Protected Area of Baia, Paolo Caputo, the recovery and the first operations of protection were conducted by the diving group of the Superintendence, with the collaboration of the reporter and the Visitor Centre of the Underwater Park of Baia. (translated by Mauro Di Fenza)