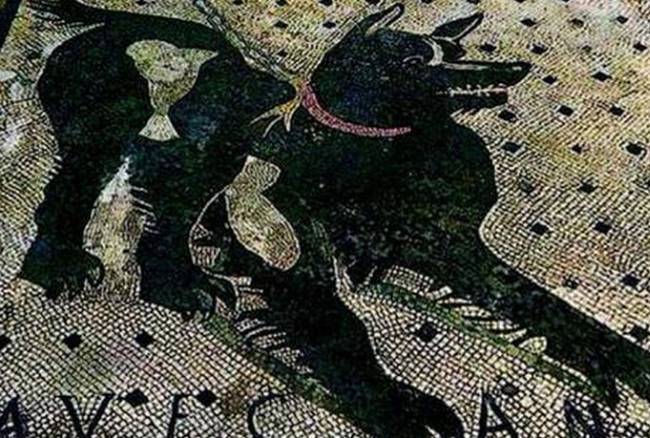 One of the most famous mosaics of antiquity, one that bears the inscription “Cave Canem” and depicts man’s best friend related, returned the admiration of the public after the recent restoration. The mosaic is located at the entrance of the domus “Tragic Poet” in the Regio VI, insula 8, the archaeological ruins of Pompeii, excavated between 1824 and the following year, which takes its name from a scene rehearsal in fresco then removed and now the National Archaeological Museum of Naples. The restoration works have also affected the frescoes in the entrance and were followed by interventions of a museum of the main entrances of the house. The mosaic is now also protected by a glass structure, to ensure a better preservation also by atmospheric agents. The structure was made of tempered glass and Corten steel painted, the use of which is a novelty in the field of cultural heritage not only in Pompeii, and to put in place were reused anchor points of the previous gate, not thereby affecting the masonry antique. Moreover, after the operation, the domus has also become possible to observe good alignment entrance atrium-peristyle-tablinum with lararium, characteristic of the houses of Pompeii. “The restoration work was always carried out taking into account the needs of use of the property, so the house is not “never been closed to the public and the mosaic was screened for just 5 days”, he points out in a note of the Superintendent of Pompeii, which has used its own funds for the surgery.