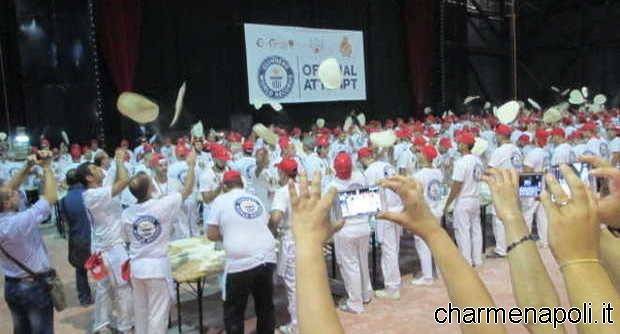 Thirty Neapolitans will try to churn out, in just 12 hours, 5 thousand pizzas, and will try to exceed the previous record of 3,600 kneaded and cooked by Thais. The challenge to the sound of flour, water, yeast, oil, tomato and mozzarella, will take place Saturday, June 27th in Chiasso, Switzerland, during an evening organized by the National Institute pizza (Inp), chaired by Claudio Ospite. At disposal of pizza there will be three furnaces installed in Independence Square, considered the main square of the town Swiss. “After the last record won the Palapartenope of Naples, in September 2014, with the largest number of pizza thrown in the air at the same time – says Ospite – are launching a new challenge to reaffirm the primacy of the Neapolitan pizza makers, their skill and their skill “. The event is organized in collaboration with the restaurant-pizzeria “Sportivi Paradiso“, run by Antonio Ospite, son of Claudio. Meanwhile, in Naples, the National Institute pizza has launched a proposal to take free courses for pizza makers, aimed at boys of sensitive neighborhoods, starting from Scampia in collaboration with the association “Ciro lives“, to mark the first anniversary of his death fan of Neapolitan Ciro Esposito. Errico Porzio, considered one of the most talented masters INP, will teach young students the art of Neapolitan pizza. The best among them will be sent to work in the main pizzerias participating National Institute pizza.