Home Flavours Festival Pastry or curly? All in !! The Fair of Sfogliatella in Piazza...

And this time Don Peppino Garibaldi be comforted with the aroma of curly and shortbread! It is just a few steps from him will be a top event for the Neapolitan style doc. And ‘This is the time of the Fair Sfogliatella !! Well marked in your diary and circled with highlighter day ranging from Friday 13 to Sunday, May 15. It is not necessary to attend all three days. It will be enough if only one, or swing by to console you in sampling the one or the other pastry chef magician Neapolitan present. Traditional, new generation, you do. We will also suggest go back home with a nice gift package home to continue the tasting. The physical form, then you’ll think from Monday 16 to follow. Appointment then in the square from 10 to 22 of each of the three days with the best pastry chefs sons of Partenope and more puffs you’ve ever eaten.

And if in addition to being gourmets and devotees to puff you’re curious, and in addition to taste it in all its variants in that its Fair on days dedicated to her, that’s for you throughout its history comes from www.sfogliatella site. en.

“The story is almost never sweet. But every sweet has its own history. Sometimes laboriously rebuilt, in some cases shamelessly invented. The history of puff belongs to the first category. This typically Neapolitan sweet you can draw a precise name of street. You read that right; name of street (in Italian “toponomastica), because the topos of the puff is a monastery

To Santa Rosa, on the Amalfi Coast, between Furore and Conca dei Marini. In that sacred place prayed a lot, but, being a cloistered convent, you could not go anywhere, and then free time there was plenty. Part of it was spent in the kitchen, administered in a regime of strict autarky: the nuns had their own gardens and their vineyards, so as to minimize contacts with the outside, and amplify those with the Lord. Even the bread religious if they did alone cooking in the oven every two weeks. The menu was the same for all (God forbid): only the older nuns could enjoy a special food, soups made of nutrients.

A 400-year days ago (we are in 600) the nun officer noticed that the kitchen was advanced a little ‘semolina cooked in milk. Throw it, he does not speak really. And so, inspired from on high, the cook threw in a bit ‘of dried fruit, sugar and lemon liqueur. “It could be a filling,” he said. But what could put us above and below?

Then he prepared two sheets of dough by adding lard and white wine, and settled there in the middle of the stuffing. Then, since even in a convent the eye wants its part, held up a bit ‘the top sheet, giving it the shape of a cap of monaco, and baked the whole. The Mother Superior at first sniffed the sweet baked, sniffed and immediately after the deal; with this blessed (and even better made) it could do good both to the farmers in the area, which at the convent coffers. The seclusion was not endangered: the dessert was put on the classic wheel output. Provided that, mind you, the villagers had been put into, some money. A this cake was given, inevitably, the name of the Saint who was dedicated the convent. Like all God’s gifts, the Santarosa could not remain confined in one place, to the delight of a few. Divine Providence is a bit ‘as the diet: it works, but do not give her a hurry.

The santarosa It took about one hundred fifty years to travel the sixty kilometers between Amalfi and Naples. Here came the first 800 for worth of Pasquale Pintauro. Neapolitans will be protesting, but no !, Pintauro is a pastry chef, and not an innkeeper. Instead the days we are talking about was actually a host, with workshop in Via Toledo, just in front of Santa Brigida. Which remained an inn until 1818, when Easter came into possession, by a way that has never been clarified, the original recipe of santarosa. That year there were two conversions: Pintauro from landlord became pastry chef, and his inn was converted into a confectionery workshop.

Pintauro did not just spread the santarosa: it modified, eliminating the custard and black cherry, and suppressing the higher of monaco cap protuberance. He was born puff. His most famous variety, the so-called “curly” … “ 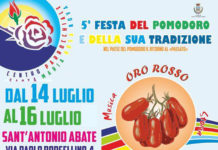 Grate Festival in Sant’Agata dei Goti. From 21 to 23 July 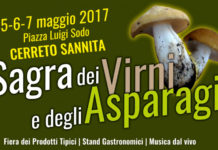 Festival of Virni and Asparagus at Cerreto Sannita. Fairs in Campania