Home History Villa Pignatelli, a royal garden in the heart of Naples 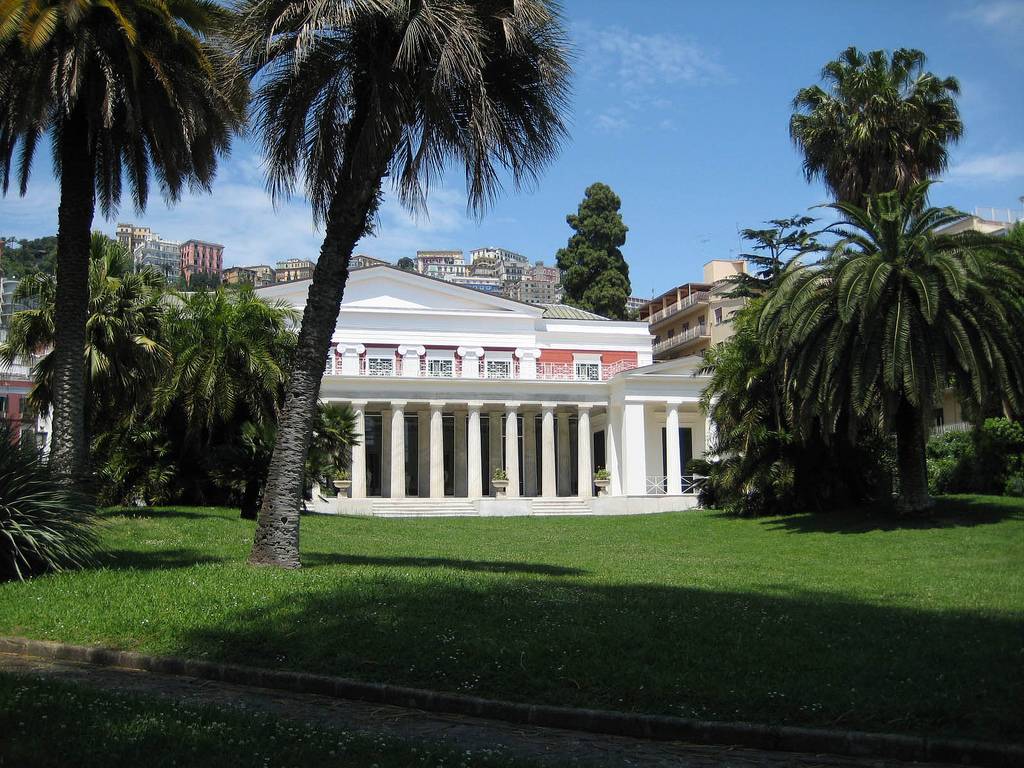 Difficult to describe with mere words the magnificence of one of the most luxurious residences in Naples, which is Villa Pignatelli.
But we try to travel with the imagination and imagine a princely residence a few steps from the sea, surrounded by large shade of green glades of arcades in the neoclassical style, designed by the Neapolitan Pietro Valente.
Here we are right now in one of the finest parks in the city of Partenope.
The noble structure, in the heart of Chiaja , dates from the early nineteenth century and was planned and willed in the style of the typical Pompeian domus, by the English baronet Sir Ferdinand Richard Acton in 1826.

Given the fickle and demanding nature of the client, the construction work of the building proved to be anything but simple.
It is said that to fulfill the will of the British gentleman, it was necessary to demolish an existing house belonging to the family of the Carafa and it was really hard to find an agreement between the parties, despite the twenty-two projects presented by the inventor!
Precisely because of the many controversies, the work of interior decoration and the outdoor garden was entrusted to the tuscan planner Guglielmo Bechi.
He was responsible for the design, according to the english model, hedges and plants that surround the avenues of the park, among whom were very rare and valuable species of flowers, a wide variety of palm trees and lush gardens of camellias that adorn the back lawn of the garden.

Despite several changes in ownership , the villa in time has not changed significantly and has retained its charm.
Recall that a few years after the death of Sir Acton, the building passed into the hands of Von Rothschild, the known family of German bankers.
In those years, at the behest of the noble Teutonic, the park was erected a building that bears the name precisely the family of Frankfurt.
Subsequently, the fate of the oasis Neapolitan tied to that of another famous and illustrious family: Pignatelli Cortes of Aragona.
The noble family of Lombard origin , wielded home ownership until 1955 , when the princess Rosina Pignatelli made ​​a donation to the Italian government, because it was turned into a museum in honor of the late husband, Prince Diego Aragona Pignatelli Cortes.

So it was that in 1960 the gates of the stately home was opened to the public, to accommodate the many visitors who came to enjoy the fresh air and relaxation offered by that precious piece of paradise located just steps from the center.
There are many fine monuments and precious ornaments that adorn the halls of the
“Museo Diego Aragona Pignatelli Cortes”, one of the first specimens of museum-house in the shadow of Vesuvius.

From the collection of the paintings of the Banco di Napoli displayed on the first floor of the building, to the collection of silve, bronze and crystal donated by generous Princess Pignatelli , to the rich collection of oriental porcelain ‘700 and ‘800, in front of such a splendor passed from century to century ,you  really miss the breathless for the excitement.
Treading the same ground which handled the most important crowned heads is an experience that truly is priceless, not to mention the charming Museo delle carrozze, housed within the complex of Chiaja, thanks to a donation by the Marquis Mario d’Alessandro di Civitanova.

Where once there were stables, are now all equestrian equipment, such as fine harness, bits, bridles , whips, handles of ivory and silver, and of course the most extensive display of carriages of different molds and nationality, from Italian to English ones, and ending with those produced in France, all dating from the nineteenth and twentieth centuries.