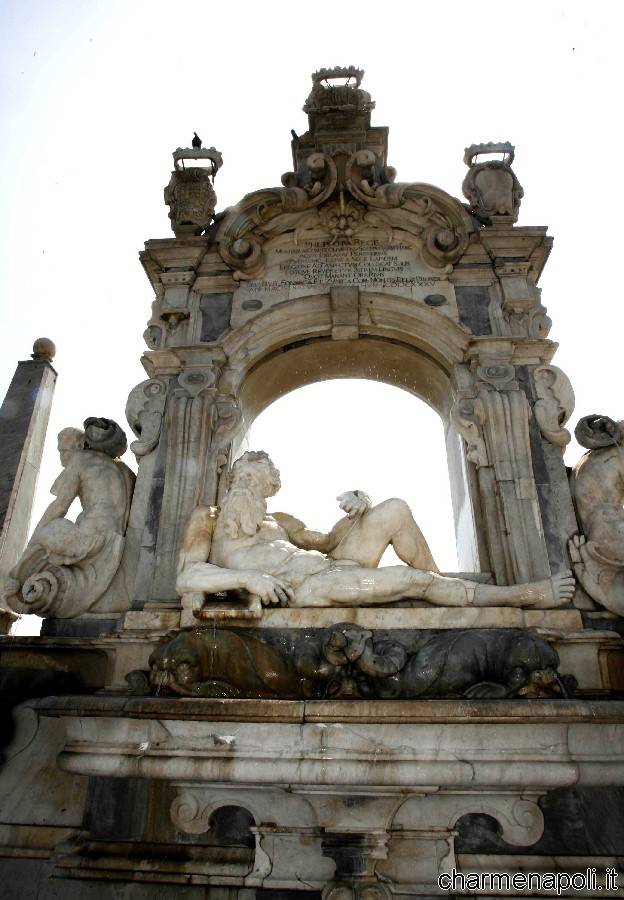 Some say that the word comes from the Portuguese word barroco meaning ‘an unrefined pearl’; others claim the etymology is from the French baroque for ‘unusual, bizarre’, but it was in Naples that Baroque became art. Ostentation and flair entered the ecclesiastical lexicon during the 17th and 18th centuries when renowned sculptors and architects created monumental churches, buildings, fountains and spires whose complex forms astounded all who saw them. Fountains are masterpieces of architecture and engineering which have typified the city since its ancient origins, when the Greek founders of Neapolis dug underground channels to ensure a plentiful water supply to their new home and built the first fountains. In the mid 16th century, the population of Naples rapidly increased, as did the number of elegant and unusually shaped pools and fountains built along the roadside, while more lavish and monumental structures appeared in the main thoroughfares outside the royal palace, in the gardens of Santa Lucia and around the harbour. One particularly fine example is the exquisite, late 16th century Fountain of Neptune created by such renowned masters as Pietro Bernini, Domenico Fontana, Cosimo Fanzago and Michelangelo Naccarino. Commissioned by the Spanish viceroy, the Duke of Medina, and refurbished and moved on numerous occasions until it was restored to its original site in Via Medina, the fountain is surrounded by a spectacular balustrade and has two sea monsters pouring water into the central basin embellished with other marine creatures. In the centre stands Neptune supported by nymphs and satyrs and holding a trident from which water gushes into the basin. One of Naples’ most famous and beautiful fountains is the early 17th century Giant’s Fountain by Bernini and Naccherino.[charme-gallery] Its monumental arches above a central basin decorated with two sea creatures and girded by statues of river deities is just a stone’s throw from Castel dell’Ovo where it enjoys a spectacular view of the Bay of Naples and Mount Vesuvius. Another noteworthy fountain is to be found at the end of Via Caracciolo: the Sebeto fountain comprises an arch containing a personified statue of the legendary river that once flowed through ancient Neapolis, supported on a large block of stone with three basins embellished by obelisks and statues of tritons. Let’s now look at perhaps the three most emblematic Neapolitan baroque monuments of hydraulic engineering. Built in 1669 by the Viceroy Don Pietro d’Aragona to commemorate the accession to the Spanish throne of King Charles, the Monteoliveto fountain comprises a basin with three lions and three eagles supporting a triangular obelisk on which stands the bronze statue of the young sovereign. The Naccherino fountain commissioned by the Duke of Benevento in the city park dates from the early 18th century and is famed for its bas-relief ornamentation, while the Sellaria fountain was built in 1649 using funds raised by local property owners. Tall obelisks are a characteristic feature of the Neapolitan landscape: stone ‘lilies’ evoking the wood and papier-mâché constructions used in bygone centuries to celebrate the Madonna in popular festivals which still survive today in the towns of Nola and Barra. The most famous (and most mysterious) of these is indubitably the Spire of the Immaculate Virgin outside the Jesuits’ church in Piazza del Gesù Nuovo.[charme-gallery] Erected during the 18th century, the obelisk is faced with marble sculptures and topped by a copper statue of the Virgin. The unusual shape of the monument and its many sculptures is said to create an image of Death which is only visible at certain times of day thanks to the interplay of light and shade. Another famous obelisk was built in the mid 17th century  by Dominican friars in nearby Piazza San Domenico Maggiore, the heart of the city during the Anjou dynasty, but the oldest is probably the San Gennaro obelisk, which was built in 1636 by Cosimo Fanzago as a sign of gratitude for saving Naples from the 1631 eruption of Vesuvius. The monument stands in Piazza Riario Sforza and comprises a quadrangular block supporting angels ‘flying’ around the statue of the city’s patron saint.