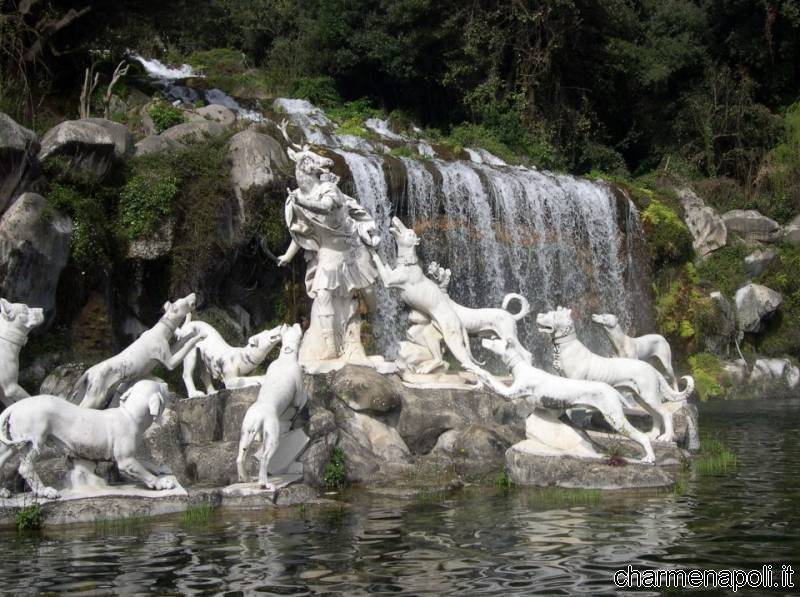 Carlo III of Borbone said it clearly : his “Versailles”  it had to be built in Caserta . The most beautiful palace of the kingdom of Naples. A building that rivals even the Royal France. Nothing had to be overlooked. Even the garden , more than just a “green park” , should recall shapes, lines , scents and magnificence of the colors, even the earthly paradise.

The project was achieved. But let’s be clear from the beginning . The Park as we know it today is only part of what the architect Luigi Vanvitelli had designed in the Sixteenth century.The vicissitudes of the real factory are known to everybody and the same initial design has been changed and downsized several times .

One of the most famous additions, not even contemplated in the original design of Vanvitelli, was, for example, the one desired by the Queen of Naples , Maria Carolina , who, following the fashion then in vogue , also built in Caserta beautiful “English Garden”.

Changes , cuts and adjustments , however, did not modify the total structure of the park. therefore today Reggia di Caserta’s garden  remains one of the most beautiful parks in the world , also recognized World Heritage Site by UNESCO: admire and be amazed , astonished forward the continuous series of scenic views, rows of trees , caves -hidden waterfalls and cascades , it’s all the same . An unforgettable experience. The Park is a treasure in the treasure that is 3 km long , about 120 hectares.

If you want to be fascinated by the magic of the lakes, beautiful sculptures and water features you only have to cross the doorstep of the entrance of the Palace and take the central avenue that leads into the park: it is from here that the wind goes through the gardens of Eden beloved to the Kings of Naples. One of the first goodies that visitors will run into along the way is the so-called ” old wood ” , the beginning of the so-called “Italian garden” . There stands a small building , the Tower Pernesta, also called “Castelluccia”, a sort of miniature castle surrounded by a moat and an impressive drawbridge. It seems that the area was used , one time, like a home to picnics as well as a place of recreation for fake land battles . The water that feeds the moat flows through a small canal. Following it back leads to the so-called “Old Peschiera” , an artificial lake  with a small island in the center , built in 1769 by Ferdinando IV to dabble with small naval battles.

From the “Old Peschiera” to the Fountain Margherita, the distance is short. The Fountain is situated in a circular flowerbed and closes the so-called Italian-style garden starting the path that leads into the English with the first of three large tanks with longitudinal development: the Peschiera Grande, an artificial pond almost half a kilometer long ending in a sculptural complex made up of three large dolphins (by Gaetano Salomone) from whose mouths gushes water.

A little further on, separated by a large lawn, towering the sophisticated  complex of the Fountain of Eolo (performed by Salomone, Brunelli, Violani , Persico and Solari) , with its semicircular portico, the Fountain of Ceres (the work of Salomone ) carved while holding in his hands the image of Trinacria and the extraordinary Fountain of Venus and Adonis by Paolo Persico, Angelo Brunelli and Tommaso Solari . We finally arrive to the wide staircase leading to the tank containing the two magnificent sculptures of Diana and Actaeon (by Persico , Brunelli and Solari ). And here that opens the show spectacular in the English Garden. The work was commissioned by Maria Carolina of Austria, it was built between 1778 and the end of the century, under the watchful eye of Carlo Vanvitelli, the son of Louis, and the English botanist John Andrew Graefer.

The garden is dotted with streams, waterfalls, walkways enriched with majestic plane trees, Lebanese cedars, pines, cypresses, magnolias, palms. The microclimate of the ponds on the surface are reflected temples and a statue of Venus on her knees while bathing .

The ponds are made even more beautiful and characteristic of the presence of aquatic plants and sculptures of fake Roman collapses and niches .The garden, in addition to hosting large greenhouses and a chalet, is also rich in indigenous and exotic plants, including Camellias imported for the first time in Europe from Japan in 1880. The shade is almost the overlying Briano mountain whose summit, the so-called “Tower”, reachable through two streets, running water piped directly from the Aqueduct Carolino . The waterfall, 78 meters high, ends in the underlying wood from New Year’s Eve, from which, in a stream of roaring waterfall, and then pours into the bath of Diana and Actaeon.