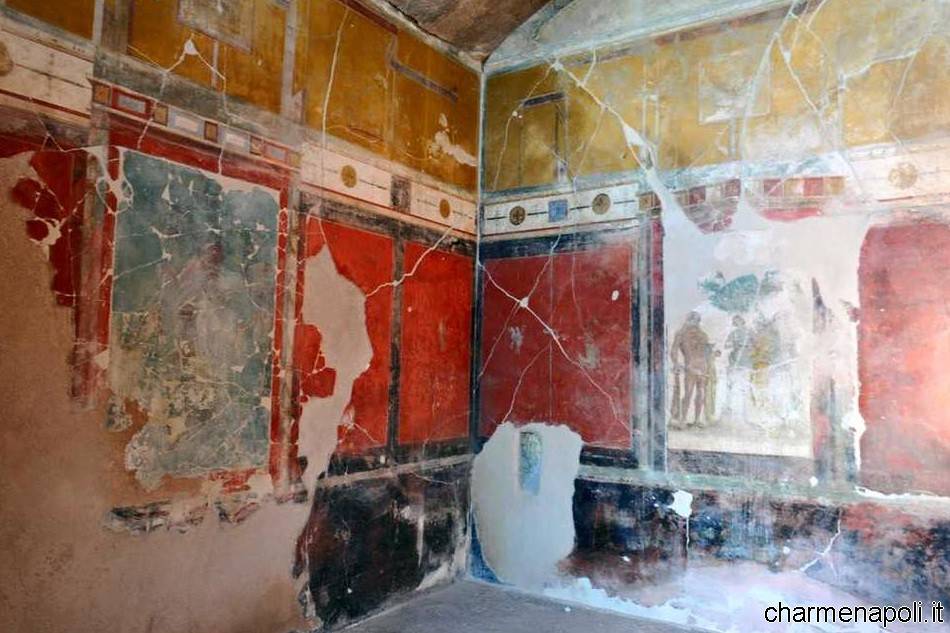 (follow from second part)… The House of the Criptoportico is probably one of the most important of the whole lot. It was labelled this way by the experts for the presence of a luxurious cryptoporticus, a sort of huge “backyard” with large windows,  which overlooked a living room and four thermal vaulted spaces decorated in stucco and painted. In 1914, the remains of some victims of the eruption were found in the garden of the Criptoportico. Plaster casts were made from their bodies  and four of them in particular, are now known  as “The four casts of the Criptoportico House garden”. Of particular interest, is the fifth of the six newly restored domus: the Fullonica of Stephanus. It is an ancient and super-equipped workshop for the dyeing of  garments,  brought to light during the campaign of excavations conducted between 1912 and 1914.[charme-gallery]The Fullonica is one of the most important and complete workshops for the washing and the treatment of cloths ever discovered in the archaeological area. The structure was equipped with huge tanks of masonry for rinsing the cloths. These small “pools” were supplied by a continuous flow of water. Slightly further on, there were some stone basins for the dyeing, the washing and the stain removal of the garments. On the second floor there were large terraces where the washed and “painted” fabrics were left to dry. They were then passed into the torcular (a press) that stretched the fabric and made it brighter. As a demonstration of the prestige and importance of Stephanus, the rooms of the Fullonica House were decorated with paintings of great taste.[charme-gallery]Finally, we have the sixth and final highlight of the “new” Pompeii: the house of Proculus the Baker. One of the few inhabitants of the buried city whose face is known thanks to the famous painting that shows him posing while holding a papyrus on which he rests his chin. He is next to his wife, who is holding a stylus. The painting, perhaps one of the most famous of all antiquity, is now on display in the rooms of the National Archaeological Museum of Naples. The Domus of Proculus was frescoed with images of Egyptian taste including erotic scenes.  Some mosaics also decorated the dwelling, including the famous “chained dog”.Today, as two-thousand years ago, Pompeii is still able to arise wonder and amazement.