Home News From Pisanella at the Louvre, the history of Treasur of Boscoreale 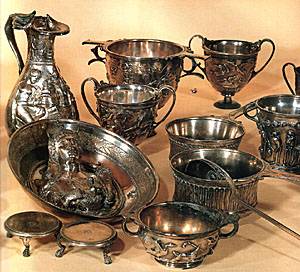 The history, some legendary, and the discovery of the “escape” in France of the “Tesoro di Boscoreale”, a collection of Roman silver stored at the Louvre in Paris, will be the focus of the second round of the event “Boscoreale and cultural treasures” promoted by association “Il Nuovo Vesuvio”. Meeting Sunday, January 19th, at 10 am, on the premises of the Social Centre – Multipurpose Elders of Piazza Pace in Boscoreale (Naples).

To tell the story, but also anecdotes, facts and trivia related to this remarkable archaeological find will be Lucia Oliva, author of the book “The Treasure of Boscoreale”, and Angelandrea Casale, honorary inspector of the Ministry of Cultural Heritage and the author of numerous essays on the archaeological finds of Boscoreale and history, in general, the hinterland of Vesuvius. The meeting will be moderated by journalist Gennaro Carotenuto.

The will of the cultural association is to pick up the thread of a conversation carried on until the ’90s by the magazine “Il Nuovo Vesuvio”, so that we can open a serious reflection on the future of Boscoreale through its “cultural treasures” .The “treasure of Boscoreale” is made up of a hundred pieces of gold of enormous value dating to the first century AD among these three mirrors in silver, a pair of drinking cups, a salt shaker (among the finds is a pretty full table service) and some gold jewelry.

It was found in April of 1895 during the excavation of a Roman villa of Pisanella in the Settetermini village at Boscoreale. The findings were in the area of “torcularium” , the environment that housed the press for pressing grapes, where apparently the owner of the villa, during the moments of the terrible eruption of 79 AD, had made him hide in waiting times best.

The events that accompanied the various phases of the discovery of the “Treasury” and then its subsequent export to France still remain shrouded in mystery. We only know that the pieces were transferred illegally across the Alps from some antique Neapolitan, with the probable complicity of the owners of the building ( on whose land had taken place the work of excavation of Pisanella), and sold here. Subsequently, many of those precious were donated to the Louvre museum by Baron Edmond James de Rothschild, who bought them for half a million francs. His gesture was subsequently imitated by other collectors who, in turn, had purchased other pieces of the extraordinary collection of Roman silver.

The gold jewelry were instead purchased directly by the national museums. Today is recomposed, the entire collection is proudly displayed in the hall of ancient jewelry to the LouvreMuseum.