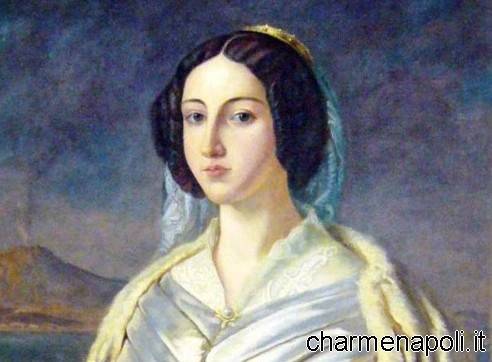 A date waiting two hundred years. Everything is ready to Naples for the beatification of Maria Cristina of Savoia, the beloved “little queen saint” of the Neapolitans. The event is scheduled for the day Saturday, January 25 when Cardinal Angelo Amato, prefect of the Congregation of the Saints (as decided on May 2 by Pope Francesco), will announce the Blessed Venerable Servant of God.

The Eucharistic liturgy (which will start at 11 am) will be presided over by Cardinal Crescenzio Sepe, archbishop of Naples. It will take place in the historic and centuries-old Basilica of Santa Chiara of Friars Minor, the place where the mortal remains of the mother of the last king of the Kingdom of the Two Sicilies, Francesco II di Borbone.

Born in Cagliari (where the king of Italy had fled due to the Napoleonic occupation of Piemonte) on November 14, 1812, Maria Christina was the daughter of Vittorio Emanuele I ( 1759-1824 ) and Maria Theresa of Habsburg-Lorraine (1773 -1832 ). He had just turned twenty when she married Ferdinando II di Borbone, thus becoming the queen of the Regno delle Due Sicilie. The two could not be more different in temperament playful and exuberant him, her reserved and shy. Yet theirs was a happy marriage. A short, but intense. King Ferdinando, in fact, was never insensitive to the charm and beauty of wife. It was able to do the same charm as well as taking on the Neapolitans who , after so long, they have never ceased to venerate although not the “Piemonte” was born and raised in the South.

The mother of “Franceschiello”, on the other hand, was a woman of uncommon intelligence, capable of acts of great selflessness and sincere charity, enhanced by exceptional mystical experiences and ecstasy. A fervent believer, Maria Cristina immediately knew how to win the hearts of his people thanks to a humble spirit and outspoken. Of her it was said that he sent money to the needy and linen, which provided a refuge for the sick and shelter the dispossessed, and that does not skimp financial support to religious institutes and laboratories Professional of the city, doing everything to remove beggars from the street. But there’s more. As long as he lived, he knew how to make himself heard from her husband who came to grant clemency to all death row inmates in the United only because she asked him.

On January 16, 1836, after nearly four years of marriage , she put the light Francesco II, the last king of Naples passed into history with the nickname of “Franceschiello” and that, ironically, was dethroned by the descendants of the house of their Maria Cristina.

The “little queen” did not survive the birth and died after two weeks. It was on January 31, 1836. He had not yet turned 24 years old. His last words, uttered on his deathbed were also its highest profession of faith: “I believe, Domine, i believe, Domine”.

The people pulled composed and silent for three days in the mortuary set up in the royal palace for the last time to review the “Santa princess” as she called it all at the foot of Mount Vesuvius. The body was buried in the Basilica of Santa Chiara, where it still stands. And Pius IX, in 1859, signed the decree introducing the cause of beatification. Decision was made after there had been the first miraculous events related to the intercession of the late queen.

In 1958, the Vatican ordered a review of the body of the Venerable and, despite the damage caused by time, neglect and moisture, it turned out pretty much intact. Then, for some decades , the process of beatification was confronted with a sudden stop. Perhaps because of the hesitation shown by some historians according to whom altars raise the mother “Franceschiello” and the wife of Ferdinando would be a “slap” to the rhetoric of the Risorgimento. Luckily the weather has done justice sweeping away all doubt and in the end it all worked out for the best.

After the recognition of the miracle of Maria Cristina (a woman Varazze was healed from breast cancer), in fact, the sanctity of the “little queen” earned the seal of the universal Church. And Saturday, in the Santa Chiara, the faithful will be able to greet a new “Blessed”.