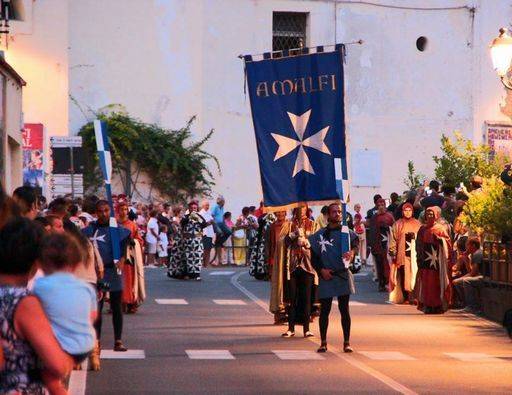 Also this year reborn the ancient glories of the Maritime Republic of Amalfi with the celebrations of the Byzantine New Year that develop between the two towns of Amalfi and Atrani, historical and natural jewels of the coast and culminates today with the parade and the official nomination of the Magister Civilization Coast, the title assigned to Coast personalities – of origin or adoption – that has excelled and been determined for particular merits. For the year 2014, the special committee (composed of representatives of the two common institutional and cultural) has referred to as “Magister” Nicola Giuliano, producer of the Oscar-winning film “The Great Beauty“. The appointment will be this afternoon at 17.30 (in piazza Umberto I in Atrani) in the presence of Archbishop Monsignor Orazio Soricelli and the two mayors of Atrani and Amalfi. The final day of the celebrations, which began Saturday, August 30, will continue with the historical procession (ninety figures in period costumes) by Atrani which will start at 18.30 and will reach the Cathedral of St. Andrew in Amalfi. To seal the historic value of the event, in the morning the city council met in the Salone Morelli with the mayor of Amalfi Alfonso Del Pizzo to formalize the twinning between the town of Amalfi and Birgu (Malta) in the presence of ambassador of Malta in Italy Vanessa Freizer and the Maltese delegation to the Mayor of Birgu Jhon Boxall. Conducted by Giovanni Simioli as an official speaker, this fourteenth edition of the Byzantine New Year will end with a live concert of Avion Travel (21.30 on the seafront in Amalfi).