Home Culture The dance of the obelisks in honor of St. Paolino 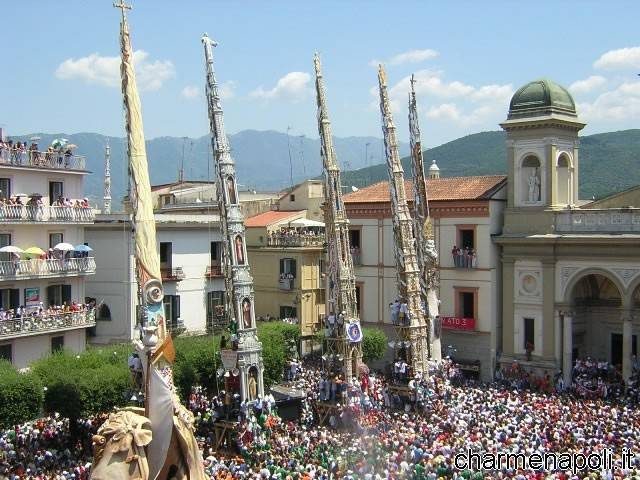 The machines swaying high over the crowd: upright toward the sky. As a pointing finger on clouds. Skyscrapers of wood and papier-mâché. This is the traditional rite of the Festa dei Gigli, religious kermesse that every year the community dedicated to St. Paolino of Nola, the patron of the city of Giordano Bruno.[charme-gallery] Among many folkloristic festivities, the Feast of the Gigli is without doubt one of the most spectacular. Its origins go back to the V cent. a.C., immediately after his death. The eight Gigli are very heavy wooden obelisks, 25 meters high and covered with imaginative and artistic papermache coverings: among them there is an imposing boat, in which remembers the sea crossed by S. Paolino for the return to his country. [charme-gallery]The Gigli and the boat are carried on the shoulders by a paranza of about 120 men who, with great skill make them dance, rotate and advance in involving march who finds place on the Sunday following the 22 June (23.06.2013) when, until late in the night, and always in the traditional order, the Gigli cross the roads of the historical center, in the jubilation of the population and in the wonder of the tourists (not to lose on Sunday morning).[charme-gallery]