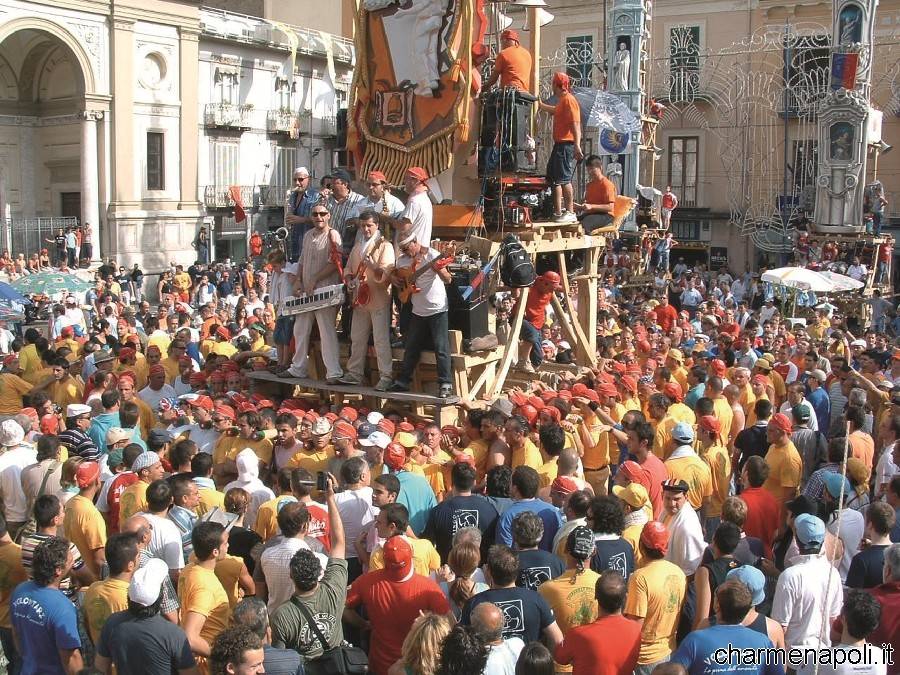 Lilies are normally associated with a child’s first communion in church and there are many lily festivals all over Italy, but the one held in Nola near Naples is the most famous Nola has been associated with many important figures throughout Italian history from the Roman Emperor Augustus, who died in the family home here in AD 14, to the heretical philosopher Giordano Bruno. However, it was the Bishop of Nola and inventor of church bells Saint Paulinus (Pontius Meropius Paulinus, AD 353-431) who inadvertently gave rise to the Lilies Festival in the 5th century on his return from Africa where he had donated all his worldly goods to secure the release of some hostages taken by bandits When he disembarked at Oplontis (modern-day Torre Annunziata) he found the townspeople waiting for him, waving flags of the town’s professional guilds and corporations and holding fresh lilies. [charme-gallery]The bishop’s heroism was celebrated every year after that, with lilies carried on wooden, poles, stretchers and eventually on wooden towers so high that in the 17th century the Bishop was forced to move the celebration to the square outside the church. Nowadays the eight wooden towers (each measuring up to 30m in height and named after the city guilds) are covered with papier-mâché decorations reflecting historical and religious themes or even current affairs in preparation for the ‘dance’ held on the first Sunday after June 21st However, the highpoint of the Festival is the parade when 200 young men carry the massive, 300 kg towers around the town under the leadership of a representative from one of the eight guilds The parade route has remained unchanged for centuries and the tests the skill of the tower-bearers who are required to make 180° or 360 turns and even leap into the air when so ordered by the guild leader. The walls along the route are whitewashed so that the judges can see when a team bumps into them and hence decide which team has led the best ‘dance’. The final act takes place on the following day when the townspeople drag the towers into Piazza del Duomo where they stay for a few days before being dismantled.