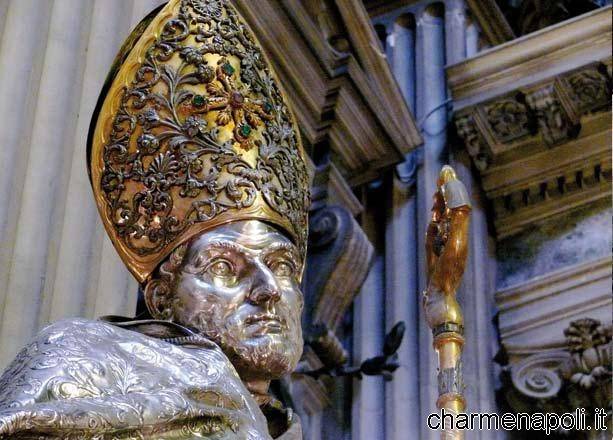 One saint, one city. If Naples is famous in every corner of the globe, not only must the pizza and Vesuvio, authentic brands of  Naplesspread all over the world, but also to the cult that for centuries has bound the town of Virgil to his famous Patron Saint Gennaro . To his intercession , over the centuries , have relied generations of Neapolitans , advocating salvation from famine, pestilence and earthquakes that have shaken the ancient capital , as it happened December 16 , 1631, when the terrible eruption of Vesuvius spared the pearl of the Gulf only after a procession organized in honor of the saint.

San Gennaro is revered as the patron saint of goldsmiths and donors of blood, but it is also a point of reference for popular beliefs deeply rooted in the city, in a mix that weaves the sacred and the profane. Until it flows in the ancient art of the dark and superstitious , always dear to the people of Naples , to interpret dreams and play lottery numbers . Possibly “suggested” and interpreted by their good patron .

Few people know that in reality the protector of Partenope was called Procolo Ianuario. Gennaro descended , in fact, from a noble Roman family belonging to the Gens Januaria sacred , that is, to the god Janus, the famous pagan deity represented with the double front . His name , therefore, would be the transformation of “Neapolitan” Ianuario of the surname .[charme-gallery]

According to tradition, Gennaro was born in Benevento , where popular piety has long been identified in some ruins from the Roman era , his birthplace , around 272 AD, but there are those who still want him born in a small town Calabrian Mount Poro : Caroniti , fraction of Joppolo .Despite the pagan origins , the young Procolo soon converted to the Christian faith becoming Bishop of Benevento.

The story that saw him involved , and that led to his consecration took place in the early years of the fourth century , in the middle of Christian persecution by the Emperor Diocletian. According to tradition, Gennaro decided to go to Pozzuoli , along with the reader Desiderio and the deacon Festo, to visit the faithful of that city. From Misenus moved to meet him Sossius the deacon , his friend. But the man was stopped in the street by thugs of the governor of Campania , Dragonzio , and locked up in jail.

Gennaro , backed by Festo and Desiderio, do not lose heart and , once you reach Pozzuoli , went to visit the prisoner. The Bishop did everything to free his friend but, having done him, as Sossio , profession of the Christian faith , he found himself with feet in stocks , along with fellow missionaries : condemned to the beasts , to be, that is, torn to pieces by lions in the amphitheater Flavius of Pozzuoli.

The next day , the judgment was not enforced . And here the sources are divided . To want to be straight to the tradition , it is said that the lions in front of the condemned , after a blessing of Gennaro , knelt at their feet, thus refusing to eat . But according to another source was the same Dragonzio , realizing that the people showed sympathy for the condemned , to ensure the suspension of the execution to avoid riots . The sentence was not canceled , but only switched . And by wild beasts ran to the ax .[charme-gallery]

On September 19, 305 A.D. Ianuario the bishop and his friends were beheaded near the Solfatara . It is said that on his way to the gallows , a beggar asked him a piece of her dress , to be preserved as a relic . “Take the handkerchief with which I will be blindfolded ” said Gennaro in man.

Tradition has it that the ax over his head, he bit off a finger because the act in which the perpetrator was preparing to strike a blow , Gennaro was settling his handkerchief to his throat. That same night , the martyr appeared in a dream to the man who had been instructed to take away his corpse and invited him to also collect the finger.

In the acts of Vatican the martyrdom of Pozzuoli is reported differently. It is said , indeed, that Gennaro and his companions were headed to Nola and here they came in Judge Timothy that imprisoned him and tortured him . Gennaro , it is said , came out unscathed from the fierce Timoteo treatment and then threw him into a fiery furnace , but this time his attempt to do away with the Bishop of Benevento did not produce any results . Ianuario , in fact, emerged unscathed from the oven and without even a burn on the garments . Flames, on the contrary , once they open the furnace , invested the pagans who had come to witness the execution.

Another version says that Timoteo was the same , not at all grateful to Gennaro who also had recovered from a serious illness, to send in the amphitheater of Pozzuoli so that it was torn to pieces by wild beasts. And then , subsequently, the ” strain ” of the Solfatara.[charme-gallery]

The tradition says that after the martyrdom of 305 , a woman picked up the blood of Gennaro in two ampoules of which then lost every trace . But a century later, in 431 , during the translation of the relics from the field of the gens Marcia of Pozzuoli, where Gennaro was initially buried in the catacombs of Capodimonte in Naples , another woman showed up with the reeds saying they were precisely those containing the coagulated blood of the martyr. As proof of the veracity of the story, the blood suddenly broke up under the eyes of the bishop John and the crowd that had gathered to watch the ceremony of translation.

Since then, the miracle of the liquefaction is constantly repeated every year in Cathedral of Naples on the Saturday before the first Sunday of May and in the next eight days , on December 16 and 19 September and throughout the octave of the celebrations in his honor. Almost concurrently with the famous procession reminiscent of the time when there was the transfer of the remains of the saint from Pozzuoli to Naples. And woe if the blood does not melt ! To popular belief, in fact, the miracle did not happen foretells , calamities and disasters disastrous. As such , the eruption itself in 1631, or the revolt of Masaniello in 1647. And again, the popular uprising of the “Four days” in 1943. And the most recent case of Ash Wednesday dated 28 February 1979. That day, the then Archbishop of Naples , Cardinal Corrado Ursi made expose , in very exceptional cases , the relics of San Gennaro and miraculously ceased cases of respiratory viruses in that period had caused several casualties among children.

The phenomenon of liquefaction, of which there are traces , for the first time in the official record , on August 17, 1389, is repeated in the porous stone kept in the church of Pozzuoli where it is believed that seven centuries ago took place the beheading of the bishop of Benevento.