Home Routes From Agerola to Nocelle, postcards from paradise 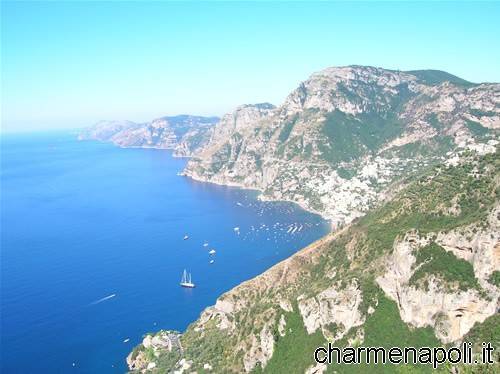 Suspended between history and mythology, a timeless paradise where sky and sea merge together along an enchanting route that culminates in the splendid scenery of Positano. This is the picture postcard offered by the Path of the Gods, a strikingly beautiful strip of land which, according to legend, was used by the Greek gods to rescue Ulysses from the Sirens. A tourist destination for many years now, this famous footpath starts in Bomerano, a district of Agerola, and winds its way, at 650 metres above sea level, to Nocelle, a picturesque village of 300 in habitants which offers a marvellous view of Capri. The footpath has long been a source of artistic inspiration for poets and writer from Goethe to Calvino because Time and Man have done nothing to alter its original beauty. On the Path of the Gods, far from the daily frenzy, you are suspended between sea and sky, immersed in primeval nature, its vegetation, its odours and its colours.  Moving between rocks which remain forever impressed on the memory, we recommend you get hold of a good pair of hiking boots and a camera and let the scenery do the rest. [charme-gallery]For the tourists who flock to the Costiera over the Christmas period we suggest starting from Bomerano. The first marvel is the Grotto of the Biscuit, situated at 524 metres above sea level, a striking geological rock formation in which marine fossils have been found. Continuing towards Positano you reach the Serra hills, exactly halfway between Praiano and the peak of Mount Tre Calli. This is an area of terraced fields, wooded stretches and sweeping sea views, where it is still possible to come across a countryman leading his mule, laden with fruit from his orchard. After brief refreshment from the freshwater springs that line the path  and an appreciative gaze at the splendid sight of Vettica Maggiore, you approach the village of  Nocelle with its delightful views. From here you can reach Positano on foot, negotiating the 1,700 steps. However, before reaching Positano it is worthwhile stopping in Fontana Vecchia di Montepertuso to see the remains of the Giammarino Tower (1528) and an effigy of the  Madonna di Santa Maria delle Grazie, who as legend has it, fought an epic battle with the devil, traces of which can still be seen in the mountains behind. The path of the gods is an extraordinarily beautiful corner of the Campania landscape.