Home News Thousands in Pompeii for the prayer to Madonna 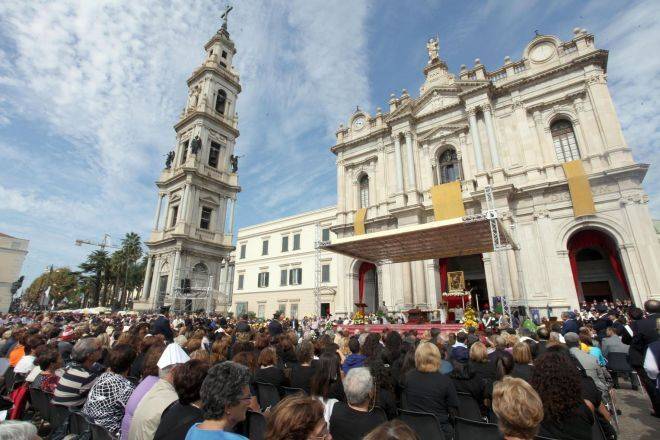 Several thousands of faithful gathered this morning on the square of the forecourt of the basilica dedicated to Madonna of the Holy Rosary of Pompeii (Naples), arrived from Italy and abroad with pilgrims walk lasted for three days to attend the ceremony of the Petition. Presided over the Eucharistic celebration was Cardinal Pietro Parolin, the Secretary of State. In the square the sick, the elderly and many children dressed in white for the “hour of the world” as it is called the Eucharistic celebration that ends with the recitation of the prayer written by Blessed Bartolo Longo, founder of the charity work around the “city new “Pompeii.
Before the start of the Mass, Archbishop-Prelate of Pompeii papal delegate, Monsignor Tommaso Caputo, saluting the cardinal Parolin, has made ​​an impassioned invitation to Pope Francis to continue the tradition of the popes who preceded him, being on a visit to Pompeii. “Say to the Holy Father Francis, who love him – said Monsignor Caputo – that we pray every day for him and expect him soon here in Pompeii”.
The Archbishop Caputo recalled that only two days ago, Pompeii celebrated “75 th anniversary of the solemn consecration of the Sanctuary,” blessed by Cardinal Luigi Maglione, Secretary of State of Pope Pius XII. “You’re the first and closest collaborator of Pope Francis – said Caputo – is to renew the special bond with all the popes and ideally also open to the Pope ‘came from the other side of the world’, the road that has already led John Paul II and Benedict XVI pilgrimage to the Shrine of the Virgin of the Rosary”.

“Here, today, after 130 years, we continue to welcome orphans, children of prisoners, victims of family and social disruption, or exploited children from warring nations – said Caputo – or severe underdevelopment. You will have the opportunity to visit some of our works of charity”.

In the afternoon, the Cardinal visited Parolin, in fact, works of charity linked to the Shrine of Pompeii. In the homily of the Mass that preceded the Supplication to Vergine of Rosario, the Secretary of State recalled “the thousands of Christians who, even today, in the twenty-first century, are suffering because of their faith”. They recalled the high priest: “I am persecuted, see their rights violated. Pray for them and, more importantly, act like them, without compromise, but living in fullness and professing our faith”.