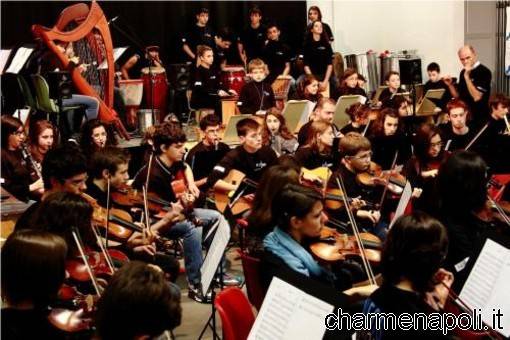 It’s called “Sing, play and walk,” a title inspired by the pastoral letter of Cardinal Crescenzio Sepe and a phrase of St. Agostino, the training part of the project “Music in the Holy Places” initiative, which was created by the cartel between the Diocese of Naples and the Campania Region, with a twofold purpose: to promote music among young people, and through the art of the seven notes, create an opportunity for cultural and social growth.
Three hundred and fifty in all, the boys, aged between eight and fifteen, selected through the parishes and associations of the popular districts of Naples and the towns of Afragola, Herculaneum and Torre del Greco, where the youth problems is growing and the context shows elements of risk. For their twelve months of study and training – but also fun – they will have their climax in a final event scheduled at Piazza del Plebiscito in the spring of 2015, after the younger bands have marched from the Cathedral of Naples, along the Old Town, to join, to perform with the artists of the Teatro di San Carlo and other important guests.

The Foundation “Doing church and town” – consisting of the Cardinal – is responsible for the appearance scientific/educational project, while the company Scabec spa has been identified by the Campania Region to put it into practice ensuring their implementation, organizational coordination and promotion.

The boys selected component, a total of six bands. It is, in particular, of:

They were accompanied by the Youth Orchestra Sanitaensamble of Parish Church Santa Maria alla Sanità (Naples), created by the L’Altra Napoli association, and already active successfully, for some years on the music scene of Italy.

Each team will have its own color. The boys were selected according to a predisposition to music and an aptitude for band instruments. Each of them, by the teachers and pastors who follow them, received musical instruments and, a few days ago, started on the path of learning, aimed final exhibition in Piazza del Plebiscito.

“He sings, plays and walk” is also a project of knowledge and appreciation of classical music and popular and traditional Neapolitan, through the landmarks of this excellence. The first appointment will in fact be May 4 at the Teatro di San Carlo with a concert for trumpet and violin artist Fabrizio Fabrizi and Fabrizio von Arx. For the first time the boys of the Bands with their families will attend a concert in one of the most beautiful theaters in the world, having visited accompanied by the superintendent Purchia. A “meeting” that will excite everyone, and that will mark the beginning of this adventure.

But there will also be a section of the project opened to the public, with a value of cultural offerings: it is a series of six classical music concerts to be held in monumental churches of Naples from the month of October and will be a dual time promotion, both of these beautiful places (there will, in fact, guided tours before the concert, even through the instrument Campania> Artecard Scabec that will provide) and the classical authors and its interpreters, really important not only Neapolitan music. In keeping with the scientific care of the “Making Church Foundation and the City”, the selection of bands that will perform in the monumental churches of Naples will take place with an expression of interest that Scabec will open in June.

The churches of the city of Naples deputies to host the concerts are:

Finally, in the fall, a week after the Feast of San Gennaro, the Orchestra of the Teatro di San Carlo will perform in the Cathedral of Naples, for a concert dedicated to young people and their passion for music.