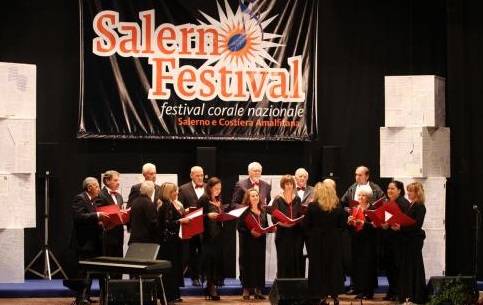 Getting ready for the 2014 edition of the Salerno Film Festival, now in its fifth edition. The musical event that will be featuring the choral singing in the richness of its repertoire and artistic expression, will be held November 6 to 9 in the city of Arechis and in some towns of the hinterland. At the start there will be 38 choirs (many are those enrolled for a total of 1.250 participants), 13 of which are from different Italian regions and 25 from Campania region (643 participants only from the province of Salerno). The Festival, which begins this evening at 20.30 in the Auditorium of the Grand Hotel Salerno, will seize the opportunity to perform in the jewels of the Amalfi Coast and Salerno province, including the room with frescoes of the Doria Castle of Angri, the Collegiata Church of Ravello, the Convent of St. Antonio in Nocera Inferiore, the Church of the Santissima Annunziata (Salerno), the Cineteatro San Demetrio (Salerno) and the Cathedral of Vietri sul Mare. The event is organized by Feniarco, Italian National Federation of Regional Choral Associations, in cooperation with Arcc, Coral Association of Campania Regional and the support of the City of Salerno, the Ministry of Heritage and Culture, and the cooperation of the Province of Salerno, chamber of Commerce of Salerno, Salerno Mobility, Superintendent for the historical, artistic and ethno-anthropological in the provinces of Salerno and Avellino, the Management Company of the Castle Arechis, Wine province of Salerno and Unitalsi.