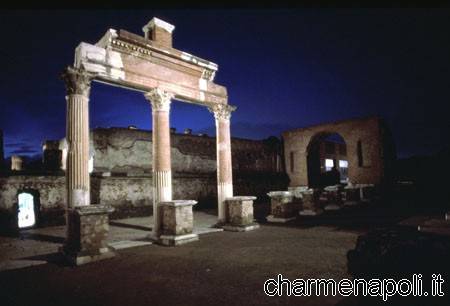 Pompei, Herculaneum, Oplontis and the Boscoreale’s Antiquarium shine at night. Next Saturday, 18 of May, at the “Night of Museums”, an initiative organized by the Ministry of Heritage and Culture, which provides for the free opening of museums and archaeological sites, the excavations in the Vesuvian area will open their doors, thus allowing , an unusual use of the ancient Roman ruins in the moonlight.[charme-gallery]

In the ruins of Pompei is scheduled a fascinating walk outside of the city, along the Avenue of the Brooms. Superintendence of archaeologists will briefly illustrate the history of the site and that of the monuments that overlook along the southern bend of the buried city from the ashes of Vesuvius. At the conclusion of the visit, some of the actors of the theater company “La Scodella” of Boscoreale read the letters sent by Plinio Il Giovane to Tacitus in which he describes, in minute detail, the terrible eruption of 79 d.c. which destroyed Pompeii.

In the ruins of Herculaneum, you can visit, starting from 7 pm and until 11.30 pm, without reservation, the pavilion of the boat where he exposed his famous boat discovered in 1982 on the ancient beach, along with numerous artifacts related to the sea and maritime activities of the city.[charme-gallery]

In the excavations of Oplontis at Torre Annunziata, opening night will start at 8 pm and will last until 11.30 pm giving a picture highly suggestive of the Villa di Poppea with the lighting of the sumptuous interiors of the rich patrician residence that two thousand years ago hosted the family of Poppea Sabina, the second wife of the Emperor Nerone.[charme-gallery]

Finally, a little further away from the excavations of Oplontis, starting at 6 pm (and up to 11.30 pm) will open its doors even the Antiquarium of Boscoreale. For the occasion, the guest house located a few hundred meters from the excavation of the villaRegina, will be on display a fresco depicting Dionysus recently recovered by the police and which comes from one of the archaeological sites in the territory of Boscoreale: the Villa of Asellius.

Visits starting at 6 pm and until 11.30 pm[charme-gallery]