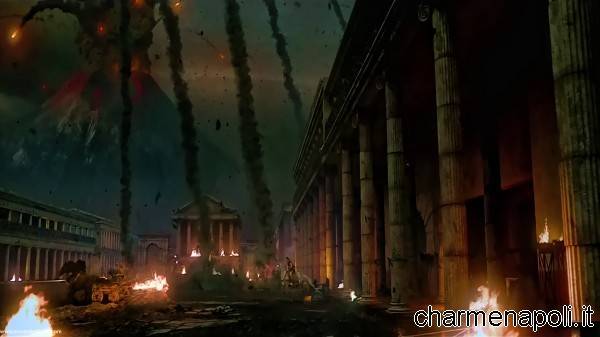 The ancient Pompeii, with its tragedy continues to inspire filmmakers and Hollywood stars. Now the films dedicated to the facts of the catastrophic eruption of 79 AD no longer count. The last, however, promises to delete them all, if only for the spectacular special effects used to reconstruct the cataclysm that two thousand years ago wiped out from the face of the earth most of the Roman colonies of the Tyrrhenian coast south of Naples, burying it under a thick layer of ash and lapilli. Dramatic effects that ascribe, full title, the film in a special gallery of the “disaster movie”.

The film which stars the sad history of the city destroyed by Vesuvius, and that still fascinates the whole world, not surprisingly called “Pompeii” and is directed by Paul W. S. Anderson, the director of “The Three Moschettier” and “Resident Evil”. In the cast are Kit Harington, Jessica Lucas, Emily Browning , Kiefer Sutherland and Jared Harris.

The reconstruction of the eruption is the pretext used by the writers to tell the story of an impossible love. That of the former gladiator Milo (played by Kit Harington), who became a slave to his master’s daughter, Cassia (played by actress Emily Browning), already betrothed to a Roman senator (played by Kiefer Sutherland) .

The dream of the two young people seem destined to never be realized when Milo is sold to another owner who lives in Naples. However, when everything seems to compromise here is to awaken the fury of Vesuvius. And then the “disaster movie” of Anderson… literally begins to light up, giving viewers breathtaking scenes, reconstructing, almost to the last detail, the terrible moments of the disaster, including fire-bombs that fall on roofs and streets of the city columns that collapse, waves that rise up to sweep away houses and embankments and the deadly glowing cloud that advances, little by little, stifling all forms of life.

Milo will not think twice about rushing to leave Naples and Pompeii, endangering his life in order to save the woman’s loved and that of his best friend, a gladiator trapped in the amphitheater of the town now partially destroyed.

The film will be distributed (even in 3D) in theaters in the U.S. starting next February 21. In Italy, however, there will come a day before, namely February 20.