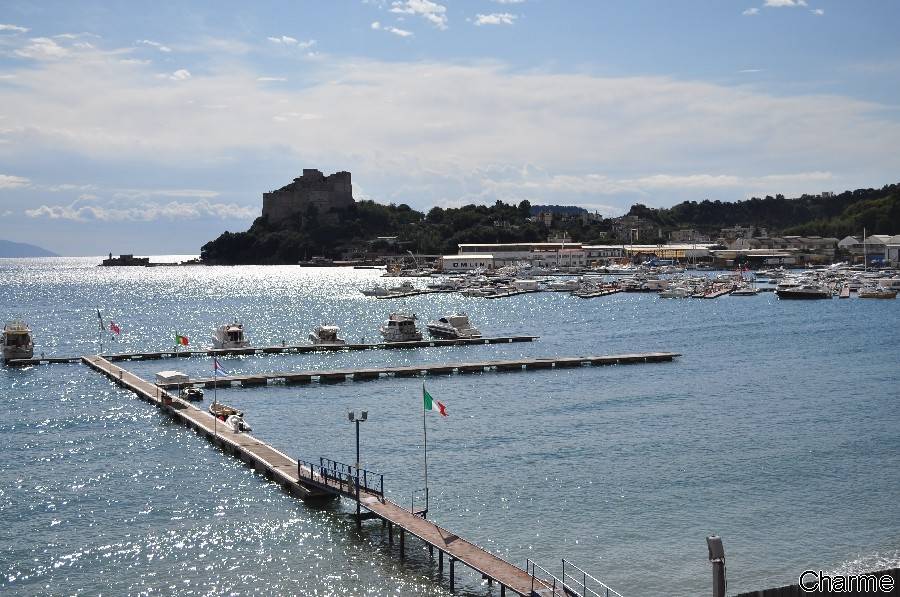 Sentinels stone’s on the fate of the town.Naples and its castles, a story that began long ago. If you look towards the Vomero hillside over looking Naples, you are instantly enchanted by the fortress of Castel Sant’Elmo, the strong hold built out of the hillside’s tufa bedrock by don Pedro de Toledo on the site of the Norman bastion known as Belforte.

Once the defensive bulwark of the Anjourulers ofNaples, a venue for the elegant receptions of the Aragonese royal family and the stronghold of the Spanuish viceroys, Castel Sant’Elmo now forms a monumental hill side museum complex along with the underlyng San Martino Chartherhouse. It is from here, looking down between the blue sky and blue sea, that stands the squat figure of Castel dell’Ovo, old prison last king of Rome, Romulus Augustulus.On the tiny island of Megaris, where the exhausted Siren Parthenope finally reached the shore, stands one of Naples’ oldest and most beautiful castles.

The castle’s history is entiwined with that of the poet, alchimist and magician Virgil, long considered the protector of the city during Middle Ages. Some claim that the term “Ovo” refers to its oval layout, but Neapolitans believe the other story, according to which Virgil cast a spell on an egg which he then placed in a sealed metal casket and hid in the castle’s deepest dungeons. Opinion differs here as some claim the egg was buried in a niche, others say it was sealed in a glass jug and the walled in but they all agree that the egg holds the key to the fate ofNaples. When an arch collapsed during the reign of Joan I, the queen had to swear that she had replaced the “mysterious” egg in order to prevent the outbreak of panic in the city. Just beyond here Castelnuovo (better known as Maschio Angioino), a beautiful castle.

Built in 1279 by the Charles I of Anjou, founder of the French dynasty inNaples, the castle was the residence of the royal family and the venue for a particularly intense political and cultural court life. In 1294 the castle’s main hall witnessed what Dante called the “grand refusal”, the abdication of the Pope Celestine V on December 13, and the appointment of the successor Boniface VIII on Christmas Eve. Other stories tell of the mysterious disappareance of prisoners from the Fossa del Miglio dungeons and huge crocodile which apparently entered the castle at night, through a trapdoor, to devour prisoners. Some say that Queen Joan used the crocodile to dispose of unwanted lovers. Alfonse of d’Aragon besieged theAnjoucastle and captured it on 12 june 1442 to become the new King of Naples and under Alfonse the magnanimous, the city lived its renaissance.

The short-lived Aragonese reing saw the reconstruction of the castle and the addition of a monumental triumph arch carved in marble above the main entrance. and here we are, finally, in Castel Capuano, where the poet Petrarch stayed in 1370 and also where Queen Joan II is said to have poisoned her lover. On the borders of the kingdom, in Ischia and Bacoli here the last fortress of Parthenope: the Aragonese Castle of Ischia and the Baia Castle Built on an ancient magma “bubble” more than 100 metres high, the magnificent castle in Ischia Ponte and the stone bridge linking it to the mainland were built by Alphonse of Aragon on the same site as Hiero of Syracuse’s 474 BC fortress. The castle incorporates a monastery, the 18th century baroque church of the Immacolata, the remains of the cathedral where Princess Vittoria Colonna married Ferrante d’Avalos marquis of Pescara in 1509, the Clarisse Convent with its cemetery and stone chairs where the nuns’ bodies were placed to dry and drain and the castle gardens served by a narrow trail dug out of the rock.  Also the Baia Castle was built from Alphonse of Aragon. The first stone being laid in 1495 to defend Pozzuoli from the Moorish pirates. Today it became the Archaeological Museum of the Phlegraean Fields.