Home History Luisa Sanfelice, a heroine for the case 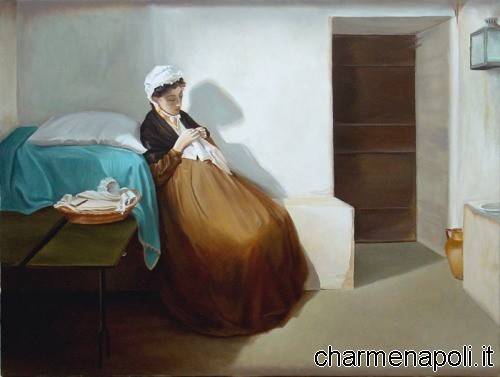 Who was Luisa Sanfelice and what role he had, really, in the facts of the Neapolitan Republic? Had it not been for the pen of Alexandre Dumas and for the praise of her Eleonora Pimentel Fonseca wrote in the pages of Monitors, probably would not be here to remember it as one of the characters “symbol” of the events of 1799 and favorite subject as well as dozens and dozens of books, “piece” plays and television dramas.

Let’s be clear: for many, the daughter of Don Pedro de Molino was actually one of the martyrs of the Neapolitan Republic of 1799. For others, however, paid dearly for having limited simply to reveal to his mistress of the time, a Republican, a pro-Bourbon conspiracy of which he was coming, casually aware of. A tip reckless and clumsy but, after the Restoration, he took her straight straight to the gallows.

In short, who was Luisa Sanfelice: only a naive or a courageous heroine? The debate is still open. And after so much time, does not cease to divide the audience of fans. But why talk about it now? Simple: because 250 years ago, on February 28 of 1764, this good-looking woman who managed to break so many hearts in the salons of the ancient capital of the Kingdom of the Two Sicilies, was born at Naples (but there are those who want it born in Laureana Cilento, in the province of Salerno), with the name of Maria Luisa Fortunata de Molina.

The daughter of a Bourbon general of Spanish origin, don Pedro de Molino and Camilla Salinero, he acquired the surname “Sanfelice” at age 17, upon her marriage to her cousin Andrea Sanfelice noble Duchi of Laurino (Agropoli). The relationship between the two was at once restless and dissipated, also because of the financial troubles that had come to be the family of Andrea. The fact is, even on the decision of the mother of Louise, the Court decided to intervene, separating at the moment the couple – who in the meantime had three children. This, however, did nothing to keep them away for a long time, so that, during a “fujtina” , Louise and Andrea found themselves in Salerno where the woman became pregnant again.

As punishment, then, Sanfelice was locked up in the conservatory of Montecorvino Rovella, but even this served to appease the passion since, shortly thereafter, the two found themselves together again, this time in Naples, in the family home of the Palace Mastelloni to Largo Carità.

The advent of the wave and the arrival of the French Jacobin the slopes of Vesuvius sanctioned in some way, the end of the turbulent love story of Louise and Andrea, changing the life of the girl who probably, in those months, he began to attend with increasing insistence lounges (and alcoves) of the capital. With the establishment of the Neapolitan Republic of 1799 and the exile of the Bourbon court in Palermo, the city began a period of the Gulf of intrigue, conflict and violence. On the one hand there were the attempts of the legitimate rulers to return to the lost throne, on the other those of the Government of the Republic of preventing all forms of restoration of the monarchy.

The fact is the Bourbons tried to regain power by organizing a conspiracy with the financial support of a wealthy banking family of Swiss origin: the Baccher. Among them was Gerardo Baccher, royal army officer. Madly in love with Luisa, in an attempt to protect the girl from the results of the conspiracy (the day after the British ships would have shelled the city), Gerardo thought it well to deliver a safe passage with Bourbon lily to show off in case of danger. Never gesture was more risky to her!

The Sanfelice, in fact, was linked to Ferdinando Ferri, along with Vincenzo Cuoco, held the reins of the Republic. Fearing, therefore, for the life of the lover, in case of return of the Bourbons, he gave, in mysterious circumstances, to him the safe conduct of Baccher revealing, in this way, the plot of the conspiracy. For Baccher and their accomplices was the end.

It was on those occasions that Eleonora Pimentel Fonseca, another future “victims” of the Restoration, perhaps trying to chase a scoop of journalism, or, who knows, maybe in an attempt to lend a hand to Luisa, Monitore Napoletano published on the Official Gazette of the Republic, the praise of Sanfelice, attributing the merit of having avoided the conspiracy. This of course only served to attract the ire of the noblewoman on the head in front of Bourbon.

Many members of the conspiracy, in fact, were dragged to prison and then sentenced to death. Among these was Gerardo Baccher (which, apparently, Luisa never made the name) were shot in the courtyard of Castel Nuovo June 13, 1799, the last day of the life of the Republic, almost as a scarring and just as revenge sanfedista the army, commanded by Cardinal Fabrizio Ruffo was preparing to take control of the city.

The same King Ferdinando never forgave the Sanfelice of having “collaborated” with Republicans, she the daughter of an officer and the wife of a nobleman of the Kingdom. She was always Louise, with her reckless “blown” to betray Baccher. It was always her to bring them to justice summary of the Jacobins!

And so, once returned to power, after the arrest of the young woman, took place in circumstances daring (the young man had taken refuge in the attic of the Palazzo Mastelloni), sentenced her to death. The execution of the sentence was postponed several times because Sanfelice declared pregnant. Circumstance, this, false, but also confirmed by two doctors complacent. It must be realized that we are at the end of the eighteenth century and that woman Luisa was still in the prime of life: young, beautiful, seductive. His case could not but pity the people. Yes, even those of monarchical faith.

More and more annoyed by the proportions that threatened to take the story, the king then ordered the transfer of the sentenced to Palermo, where he visited a medical board again excluding pregnancy. For Luisa Sanfelice there was nothing more to do. The woman was brought here in Naples and executed in a manner hideous (it was practically slaughtered on the scaffold of Piazza Mercato), on 11 September 1800, between the general commiseration.

According to the historian Pietro Colletta anything worth trying the daughter of King Ferdinando, Maria Clementina, wife of Crown Prince Francesco, to invoke the grace. Legend has it that Mary had a baby a few days before the execution of the sentence, he asked the king, instead of the traditional “three graces” that also was entitled to the right, the life of the hapless, receiving in return a rebuff.

The other people involved in the conspiracy of Baccher fared much better: Vincenzo Cuoco and Ferdinando Ferri, in fact, escaped the noose by taking the path of exile from Naples. Ferri even later, he forgot his past Republican and could even return to the city, becoming Minister under the government of Ferdinand II of the Two Sicilies.