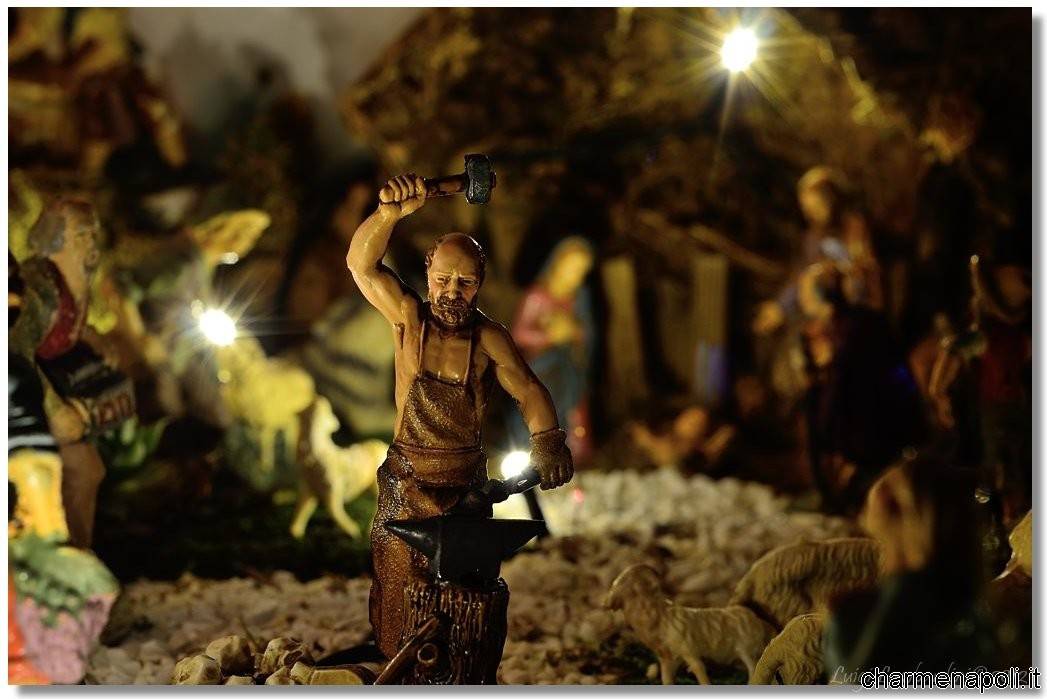 With the changing of the habits and customs of the population , the representation of the classic Neapolitan crib undergoes transformations .
The scene shifts to more and more outside of the group of the holy family , and with the tradition of the “reciting crib “ the characters and crafts of Naples profane , caught glimpses of real life, went to float next to the manger , side by side with the sacred statues depicting Joseph, Mary and the angels suspended in the air. Here, then tick the shadow of the cave of Jesus, laundresses , fishmongers , beggars, butchers , innkeepers , acquafrescai , watermelons vendors , customers, little women of ill repute and other characters of the people. I just can transform Bethlehem , the village of Palestine when Christ came into the world , in a city full of alleys, taverns and taverns. Just as Partenope of the eighteenth century.
Thus was born , almost coinciding with the boom of ” presebbio che se fricceca” the profession of ” figurinaio “ , a job that took the women of the house in the cutting and sewing of garments and implementation of shepherds , animals, tools and musical , garden products, all made as if they were ” painted ” live .
All this happened under the reign of Charles III of Bourbon, a flourishing period for both the city of Naples, and to the masterpieces of the crib . A period that saw the widespread practice of visiting the most beautiful cribs in the capital in the holiday season , a custom that involved everyone.

King and court included. I loved not only admire such models in vogue at the moment, but also to participate in their realization, as was the case with the nativity scene in the palace of Caserta , whose construction contributed , in part, princesses and noblewomen who were responsible for hand sewing the shepherd’s clothes . Hence the adoption of the definition of crib courteous. A perhaps more ” land ” and less clerical state for the celebration of Advent. But also a mechanism that , at least initially , the Church hindered in part , not yet ready to accept the revival of a cult of secular rule for the consumption of only “insiders ” , as we see in the crib still on display in the church of the Gesù Nuovo in Naples, where the canons of the perfect crib Jesuit seem respected to the letter. The practice of ” self-propelled crib ” However , over the years , was gradually spreading to spread those same churches who initially turned up their nose in front in the presence of shepherds depicting drunks , little women , beggars and peasants on the Sacred Nativity scene .

The best example of this ancient art that he also wanted the people’s representatives among the protagonists of the crib is the Church of the “Spirito Santo in Toledo”
( where the artist Massimo Stanzione is buried  ) , where it is still possible to admire a rare specimen manger of the eighteenth century. But Naples is full of accomplishments and the like do not really are spoiled for choice: just make a quick trip to Santa Chiara , the citadel of the Franciscan friars , to realize this. Here, for comparison, stands the extraordinary crib by Ferdinand IV of Bourbon and contributed to the achievement of which all the great sculptors of the time, including Giuseppe Sammartino , the author of the famous Veiled Christ on display in the “Cappella di San Severo”