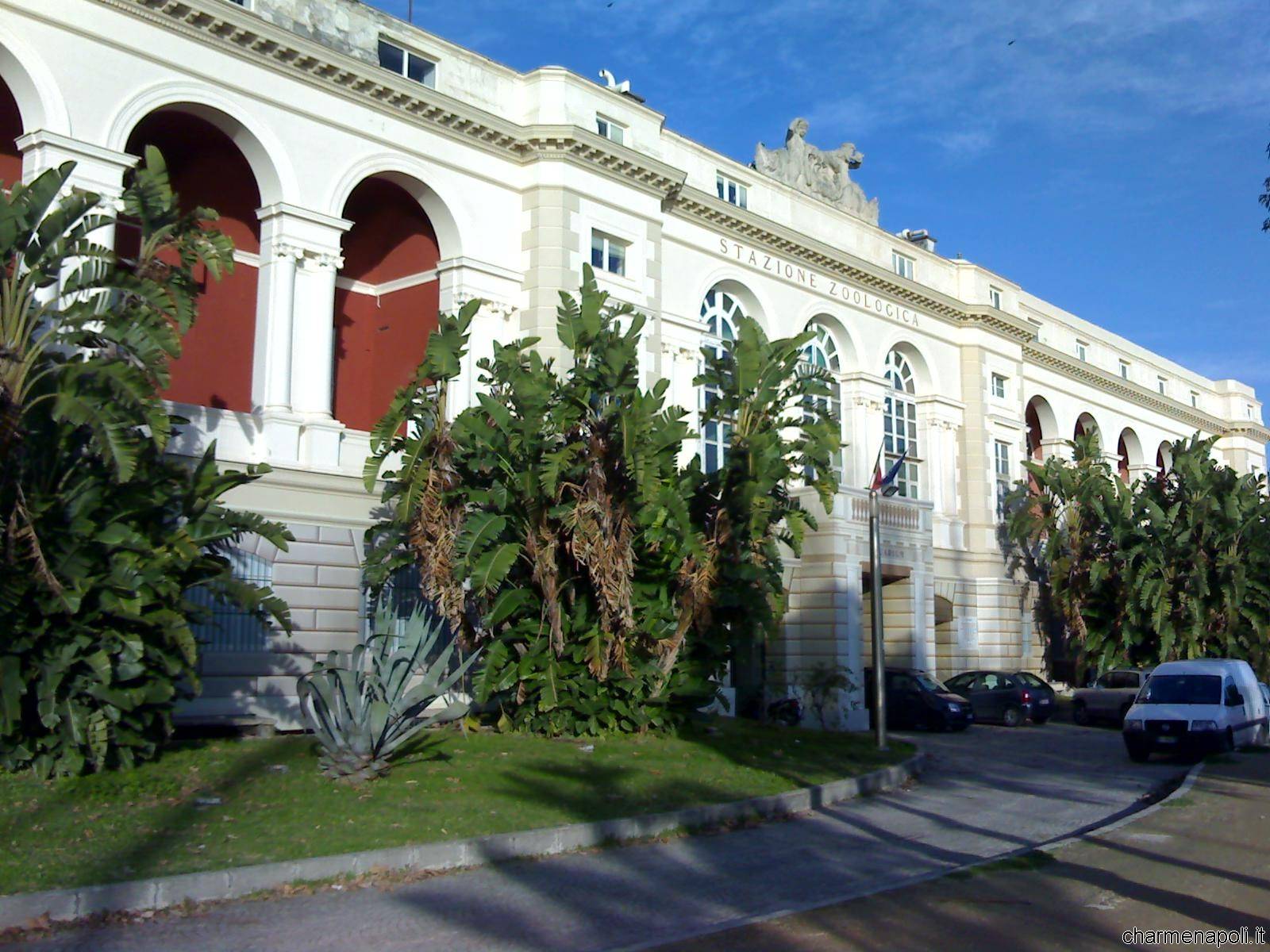 It all began in 1870 when the City of Naples gave the naturalist Anton Dohrn , a follower of Darwin , an area in the Villa Comunale in which to build a Zoological Station , the first institution not  of the Bourbon branch  .
Two years later, in 1872 , work began at the expense of the German zoologist under the direction of Oscar Capocci , joined subsequently by the German sculptor Adolf von Hildebrand . At the conclusion of the work, the structure led the signing more artists who made their art converge in the historic complex .
The official inauguration took place on April 14, 1875 , it was open to visiting scientists in September 1873, and to the general public in January 1874.

The aquarium and library

After the construction of the first building , which is currently at the center between 1885 and 1888 added a second building connected to the first by a bridge , and in 1905 was added to the courtyard and the western part . Only fifty years later, between the first and the second building was added the rich technical library that was opened with the donation of the first group of scientific texts by the same Dohrn and now has a huge collection of over 90,000 volumes.

The room dedicated to reading and scientific consultation on the first floor of the building was decorated with murals depicting rural scenes and seascapes with the background scenery of Naples and Sorrento, the work of master German painter Hans von Marées . To complete the decor of the room , the ceiling painted in monochromatic colors and tiled floor in the Pompeian style.
But the real highlight of the research center was the aquarium with herbarium , to the archives , the library and the extensive zoological collection , is still one of the oldest and most envied in Europe.

The marine structure in the intentions of its founder was to act as a lever to spread knowledge and interest in the biological species among the general public .
Originally , the aquarium covered 527 square feet and was exclusively devoted to the fauna of the Mediterranean up to expand the number of tanks at about thirty with over two hundred species of marine animals and plants , most of which come from the Gulf of Naples.
There were even several sea turtles , mostly of the species Caretta caretta , accepted waiting to be reintroduced into their original habitat.
To implement his plan of cultural enactment , however, the scientist had to deal with the economic aspect of the matter, so it was that the ingenious mind of the naturalist Teutonic he developed the so-called “System Bench” .

The project specifically provided for the rent of the place and the necessary equipment to carry out research , in exchange for an annual fee university by governments , or private scientific bodies , alongside what he instituted a share of payment for entry aquarium, in order to support the salary of a permanent assistant and ensure material to laboratories.

Among the many researchers who sailed into the harbor station , there was a German physician and physiologist Otto Warburg that between 1908 and 1914 , built his first independent research on the consumption of oxygen by the sea urchin egg after fertilization. His studies led him to the important discovery of the iron as a material essential for the development of the larval stage , thus beginning a new research program on your breathing , until you get the excellent recognition of the Nobel Prize in 1931 for his discovery of citocromo ossidasi .

The disposal and recovery

The activities of the research center underwent a forced halt at the turn of the Second World War between 1943 and 1945 , a period when the doors of the center were closed .
Following the reopening of the operational core of the research, we realized the need for a new institutional and administrative structure in order to ensure a stable financial base and permanent. So in 1967 the Italian Government entrusted the management of the Commissioners in overtime, until the enactment of a special law in favor of the zoological station , which in 1982 secured an increase in funding and he recognized the legal status of ” Special Scientific Institute “ in the public interest , under the supervision and control of the Ministry of University and Scientific and Technological Research .

They were then introduced measures to modernize foreseeing the introduction of new laboratories for biology and chemistry, the setting up of training courses, conferences, seminars and teaching doctoral university .
The body is now a public research body , supervised by the Ministry of Education and Research, but this could not prevent the advance of the sale of the spectrum feared just a year ago .

The intervention was inserted in the decree of the ” spending review ” Monti‘s government, with the risk of deleting a piece of the history of biology.
Fortunately, today the danger of suppression has not translated into reality and the center confirms an active scientific community of reference.