“The jewels are not only valuable accessories to show off at times more or less important. A gem can and should tell a story: I always am inspired by the story of Capri, in the themes and materials that I choose to use to make my creations. And through these creations, a woman tells herself”.Antonella Puttini, jewelry designer of the fashion house caprese “Angela Puttini Capri” was inspired by St. Anne to tell the story, and particularly impressive, the church of St. Anne, the protagonist last Saturday, at the traditional feast of St. Anne in Borgo. Here, during the religious event organized by the Parish of Saint Stephen patron of Capri with the support of the Culture of the Municipality of the island, the young musician Francesca Vacca has performed a concert for flute, wearing the “pendant Sant’Anna” homonymous collection made entirely by hand by the designer Antonella Puttini.

“I wanted to create this gem, inspired by and paying homage to St. Anne, after a night I attended the presentation of a book that told the story of the little church of St. Anne, its frescoes and purification rituals that took place at ‘inside the sacred building since 1500″ said the talented artist of the island.”All my collection – he added – is inspired by the story of this beautiful island that the whole world envies us. I was so fascinated by what I was hearing that I wanted to play on a pendant in gold and silver dedicated to Saint Anne, with a miniature copper, the fresco of the Virgin Mary located in the church of the village, enriching it with diamonds cutting pink with a pearl and Australian Baroque. Have been able to see this pendant worn during the festival of St. Anne at Borgo has filled me with joy and pride“.

After the Holy Mass celebrated by the parish priest, Father Carmine del Gaudio, the flutist Francesca Vacca has performed in the Ave Maria by Gounod and then continue the concert in the churchyard, with the notes of the Sarabande and Bourée Angloise of Johann Sebastian Bach, the Sonata in A minor by Carl Philipp Emanuel Bach Fantasia and the number 2 and number 6 Telemann. After the mini concert flute was the turn of Gianni Lembo, accompanied by his guitar, sang some songs of famous Neapolitan and international repertoire, followed by the reading of Paolo Federico, all in the presence of numerous guests, inhabitants of the village , Italian and foreign tourists, and institutions, the Mayor of Capri Gianni De Martino and the Councillor for Culture Caterina Mansi.
The Feast of St. Anne at the Borgo, who lives on today as a moment of joy popular, in homage to the ancient celebrations of thanksgiving and purification, was started at 10.30 am on Saturday morning, still in the church of St. Anne, with a Mass to celebrate custody of expectant mothers and the blessing of children and ended in the late evening with a moment of tasting gourmet, made of biscuits and wine. For the duration of the religious event, the owner of the house caprese “Angela Puttini Capri”, located a few hundred meters from the church of St. Anna, wanted to pay homage to the Holy Mother the Virgin Mary, putting in the window of her boutique the St. Anne Pendant jewelry next to a book about Capri and its history.

The jewels “Angela Puttini” born inspired at first to Putti, the Bambocci plump and cheerful for nothing sacred figure representing the child of Eros, the god of Love, and then be influence by the stories and the atmosphere of Capri and cultural roots of the bay, so as to impress on rings, bracelets, pendants, brooches and necklaces to the legend of Tiberius, Pompeii, and the eighteenth-century art of Neapolitan tradition. In the hands of the artist caprese are concentrated not only the goldsmith tradition and craft of the Mediterranean, but especially the original taste and always attentive to the aesthetic needs of contemporary jewelery. “My creations are born from the desire to convey the true emotions – says Antonella Puttini – such as joy and serenity, to remember the unique and magical moments of our history“. 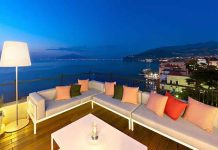 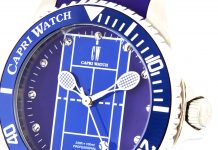 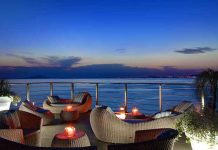