Home News In Naples, the launch of the pizza is a record: beaten the... 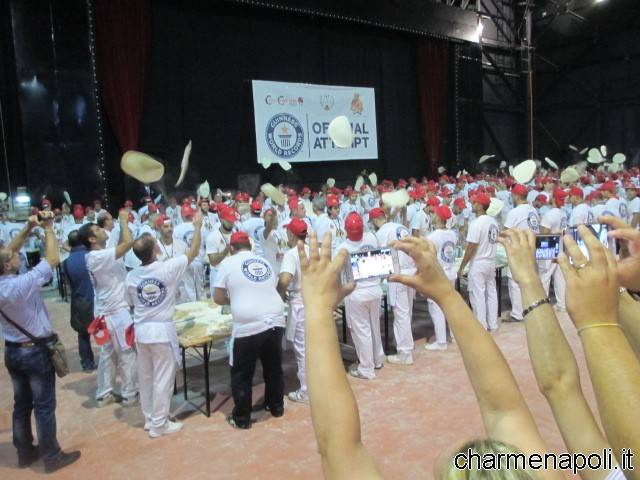 With 278 people to launch a pizza dough in the air, Napoli broke the previous record held by the Americans (265 people in the city of Los Angeles in June 2014 to launch at the same time as many pizzas). The record has been certified by the judge of the Guinness World Record, Lorenzo Veltri who first counted the candidates in the race, in the frame of Palapartenope of Naples, and then measured all the pizzas (minimum diameter 31 cm). “A feast of taste in which he won the mastery of all the pizza, called to a united effort to make history. Playful opportunity to make known to the world the goodness of the pizza margherita enhanced by better agri-food products from Campania “said Claudio Ospite, vice president of the “Regina Margherita” which, together with the National Institute pizza organized the event, with the partnership of Radio Marte. A rematch, after 10 years, from the previous record attempt organized by the associations themselves that, in September 2004 at the Pizza World, had made ​​a Città della Scienza a “pizza Margherita” with a diameter of 5.19 meters, cooked in a wood-burning oven of 6.70 meters built for the occasion. The attempt failed for a regulatory problem. Enthusiasm even among the pizza makers from all over Italy (some also from Japan) who took home a medal and a certificate from the Guinness. Among them twenty women wishing to regain a leading role in the kitchen and a dozen disabled children of the “Tutti a Scuola” by Toni Nocchetti. In the course of the evening was handed a lifetime achievement award at 9 pizza with more than 50 years of activity: Antonio Starita, Antonio Marigliano, Angelo Abbate, Gaetano Abbate, Umberto Furnished, Gaetano Cristiano, Antonio Mosca, Gaetano Esposito and Enzo Sannino. For the occasion, the Maison Cilento wanted to give a tie celebration.