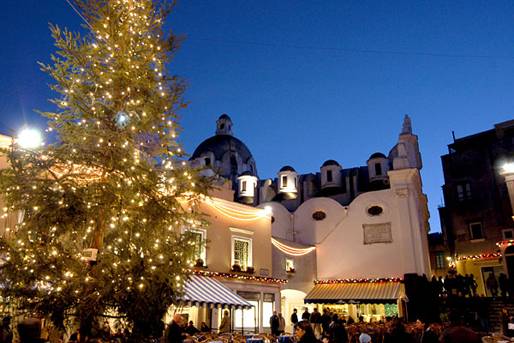 The island of Capri (Naples) is fully booked for the end of year festivities. The Piazzetta prepares for New Year’s Eve for the live music and disco dance outdoors, braving the cold. The evening of 31 will start at 19 with the exhibition, communicated to surprise a few days ago, Peppino Di Capri that will present to guests of the island of Capri and the Faraglioni his new album “L’acchiappasogni“. They are full of the few establishments open, including the 4-star Queen Christina who has long hoisted the sign of sold out. The exchanges of many hotels instead ring vacuum: there are many structures that have decided to remain closed for these holidays. Tourists have therefore decided to crowd the few hotels in business, homes and private villas, guesthouses and b&b. Many restaurants have set up the New Year’s Eve, including the Altro Vissani that offers a menu with truffle and fish in the Gulf with the music of Aurelio Fierro and Fabrizio, the Capris, the Vesouvio, the Verginiello, the Quid, all at teaches traditional and in Anacapri the Boccone. Disco dance with dinner at the tavern “Anema e Core” and live music with Guido Lembo, New Year celebrations at Number Two and the VV club. Many celebrities who will spend the New Year in Capri, among them the young American actor Ellar Coltrane, true revelation of cinema, star of “Boyhood” super Oscar favorite, this island among the guests of “Capri, Hollywood“, on-photographed red carpet via Fuorlovado where she was an exhibition of posters of Soviet films. Great expectations for the wedding of actor Fabio Testi that next January 3 will marry in a civil ceremony in front of the mayor of Anacapri Franco Cerrotta his company Antonella Liguori.