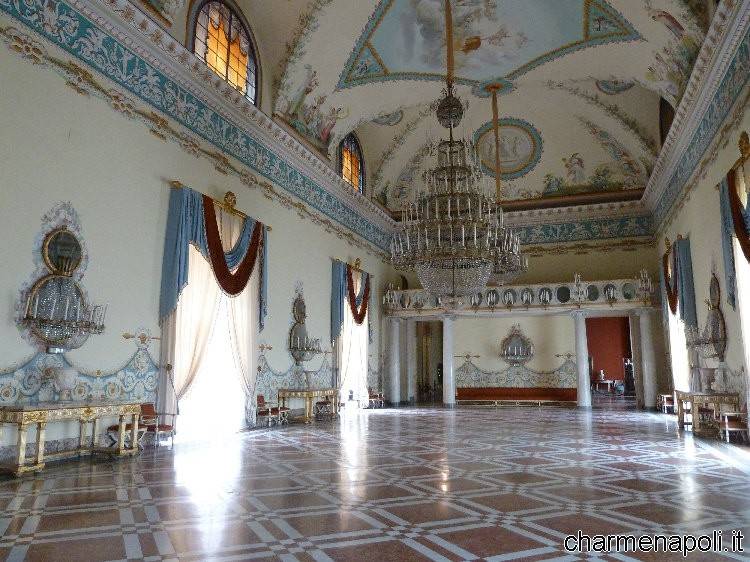 History, culture and art of Naples served on a silver platter to those who want to get to know our beauty and our heritage. Between glimpses of history, culture, music and shots of the author. Fed the program ” European Heritage Days 2013,” scheduled on 28 and 29 September in the villages and in the most beautiful cities of the Old Continent . Two days to be experienced to visit places rich in history . To discover together the many wonders that provides Naples , the cradle of ancient civilizations before the world of Ancient Greece .

It starts Saturday, September 28 , at 10:30 am , with a guided tour to Castel Sant’Elmo , sponsored by Polo Special Neapolitan Museum in collaboration with the Italian Institute of Castles non-profit organization . The tour will wind through the fortifications of the sixteenth centuries-old fortress built by Emperor Charles V and the Viceroy Don Pedro de Toledo , thus offering the visitor a reading from a technical – military fortress which is one of the symbols of architectural experimentation in the field of defense .[charme-gallery]

Not far from Castel Sant ‘Elmo , how many they wish, can enjoy delicious organic grapes produced by the ancient strains cornicella and Catalanesca , taking part in the harvest, which will be held ( in collaboration with the company ” Gardens of the South ” ) in the beautiful green lung of the Certosa and Museum of San Martino, specially open over the weekend to accompany tourists and visitors on the trail of the ancient vineyards of the monks.

Still on the subject of manors , in the spaces of Castel dell ‘Ovo , Sunday, Sept. 29 – in conjunction with the special opening of the Seat of the Italian Castle , as part of the festival ” The castles of Naples ,” sponsored by the Institute , in collaboration with the Regional Directorate for Cultural Heritage and Landscape in Campania – will be able to attend the screening of a series of four short films about the legend of Megaride , to the now vanished castle del Carmine and the medieval cistern also known as the “Cave of the Siren ” . All accompanied by a guided tour of the castle erected on the rocks of the islet of Megaride and made famous by the legend of the egg of Virgil.[charme-gallery]

For many , however, were diving enthusiasts , do not miss the “Family Snorkeling Tour ” offered by the Center for Interdisciplinary Studies Gaiola Onlus on Saturday September 28. The appointment is at 10.00. Two paths offered : the first , which starts from the cliffs of Gaiola, with the opportunity to become familiar with a real marine biology lab . The second , more focused on archeology , which arises from Descent Coroglio . Either tour , visitors will be provided with the necessary equipment to throw yourself in peace and quiet , so you can enjoy the treasures of the Marine Protected Area of the Gaiola Underwater Park : fabulous places , such as the Archaeological Park of the Pausilypon (where can admire what remains of the luxurious villa of Pollione ) , unique and fascinating backdrops , where marine organisms filled with shapes, colors and life that the history of the earth and that of man have created over the centuries . And enchanted places like the Cave of Sejanus .

Also in the day Saturday, September 28th , on the occasion of the anniversary of the “Four Days of Naples ” , the heroic episode of resistance that 70 years ago saw the capital of Campania rise against Nazi troops occupant , at 18.30 , in the spaces Auditorium of the Museum of Capodimonte will be screened Nanny Loy ‘s famous film that evokes , in fact, those dramatic events. The event was sponsored by the association Friends of Capodimonte, Celanapoli , Verginisanità and Miradois . How many of them wanted to take the opportunity to familiarize themselves with the treasures on display in the Museum of Capodimonte can do it , enjoying one of the four tours scheduled that day and entirely dedicated to the knowledge of the masterpieces and the collections on display.[charme-gallery]

Not far from the hill of the palace, the European Heritage Days will continue with the presentation of the cycle of cultural activities for the biennium 2013-2014 ” Conversations and concerts Floridiana ” , which will be held Saturday morning at 11 am in the frame of the Museum Duke of Martina . For the occasion , there will be a concert with music by J. S. Bach , C. Ph. Bach and J. Jbert that will end at noon, with a tasty aperitif offered by Alba Catering.

The two-European day made in Naples will conclude with the exhibition , which opened a few days ago at the Museo Pignatelli , with a selection of 20 photographs of different sizes taken in the last decade and taken from the most recent publication of the well-known director and film maker Wim Wenders , “Places Strange and Quite ” published in 2011. The exhibition will remain open until November 17th , is dedicated to one of the main protagonists of the New German Cinema .[charme-gallery]

APPOINTMENTS OF THE WEEKEND

Harvest in the Charterhouse . The oldest vineyard of the monks
Certosa and Museum of San Martino

The Castles of Naples
Guided tour and entrance free
Headquarters of the Italian Institute Castles – Castle of the Egg
Info: 333 6853918 – castellicampania@virgilio.it