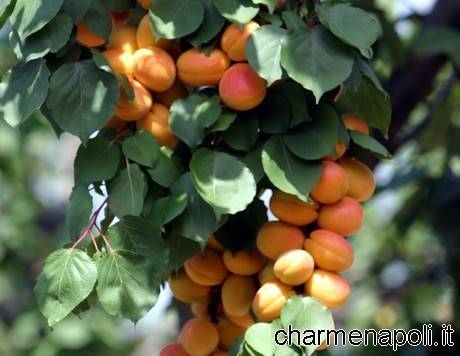 First mentioned in the book of Chianhai ching (lit. “Classic of the Mountains and the Seas”), apricots become known as the golden orb by the Greeks who used it to make the nectar of the gods. In 100 BC, the Romans brought the fruit toItalywhere its sweet perfume and golden velvet skin won over the hearts and minds of poets and writers like Pliny the Elder who cited it in his “Naturalis Historia”. Then it was regarded as an aphrodisiac and a symbol of fertility but later Italian poets considered it the essence of sweet melancholy while in British folklore it was seen as a precious lucky charm. Today apricots grow spontaneously in the crumbly fertile soil aroundMount Vesuvius, where they have always been associated with womanhood; indeed many of its varieties have names that reflect aspects of the physique and character of women.[charme-gallery] Some of the rarer varieties even have a sweet edible stone that can be savoured after devouring the flesh, but apricots are everyone’s favourite fruit, whether fresh, dried, distilled or turned into jam and spread over a pastry casing and baked. About 43,000 tons of fruit are harvested every year around the volcano (75% of the province’s total production) and it is an ideal fruit to take on a picnic to theMount VesuviusNaturePark, where you can enjoy the sweet golden fruit in the harmonious silence that reigns here and admire the breathtaking view of theBayofNaples.