Home Flavours Pastries The holiday with a flavour for surprise 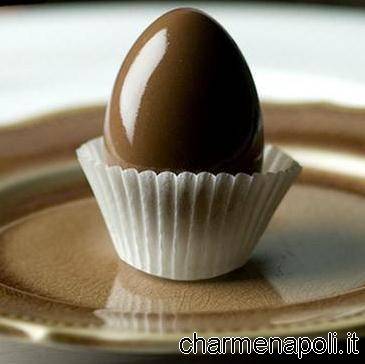 The food of the gods. The Europeans learnt the Maya secret when they brought chocolate from the New World to the Old Continent and it is now one of the world’s most popular sweets: few, if any, can resist it. The mere sight of chocolate makes the mouth water, whether it be milk or plain, with hazelnuts or almonds, and it makes you feel good. All the more so when it has a beautiful shape. Every holiday has its chocolate treat, but Easter is the finest example and the chocolate egg is probably its best known symbol. The Easter egg embraces both the sacred and the profane; the egg was a highly symbolic shape long before the birth of Christ and often represented life itself. The ancient Egyptians and Persians would exchange hen’s eggs when Spring arrived, and eggs were frequently given as gifts at Easter in the Middle Ages to symbolise the rebirth of Christ. The Crusaders spread this custom throughout Europe and introduced the first Ostrich eggs toEurope. Some medieval paintings show ostrich eggs hanging in churches where they were sometimes used as reliquary containers by priests as they had a harder shell than hen’s eggs. [charme-gallery]Soon people began to decorate the eggs with images of the Resurrection and embellish them with ribbons, lace, silver, gold and precious stones. Culinary traditions called for dishes containing hard-boiled eggs and cakes in the shape of birds (like the modern-day Colomba), but the chocolate egg was created by the chefs of Louis XIV, le Roi Soleil, in an attempt to imitate the ostrich egg. Later, chocolate eggs contained a ‘surprise’ gift: the first recorded example was a gift for Francis I and contained a wooden carving of the Passion of Christ, but the ‘surprises’ gradually became increasingly lavish. Another Easter legend claims that the gift in the egg was the idea of the Tsar of Russia who commissioned jeweller Carl Fabergé to make a special egg for his wife in 1885: an egg of gold with white enamel, whose ‘yolk’ contained a golden hen which, in turn, contained a diamond miniature of the imperial crown and an egg-shaped ruby. Whatever its origins, the chocolate egg with a gift inside spread throughout the world as the symbol of Easter. Large or small, decorated with icing or white chocolate, the Easter egg in a ribbon is as essential to an Easter  dinner as traditional cakes like pastiera, chiacchiere and migliaccio. Brand name eggs can be found in any bar or supermarket, but the exquisite goodness of hand-made eggs is the pride of Neapolitan master confectioners who prepare their eggs just before the holiday to ensure they are fresh and flavoursome on Easter Sunday. The molten chocolate is poured into two half-egg moulds, and after when it has cooled the gift is placed in the centre and the two halves are joined together. Chocolate eggs are a timeless delight for all ages: superb on the palate and good for the heart.