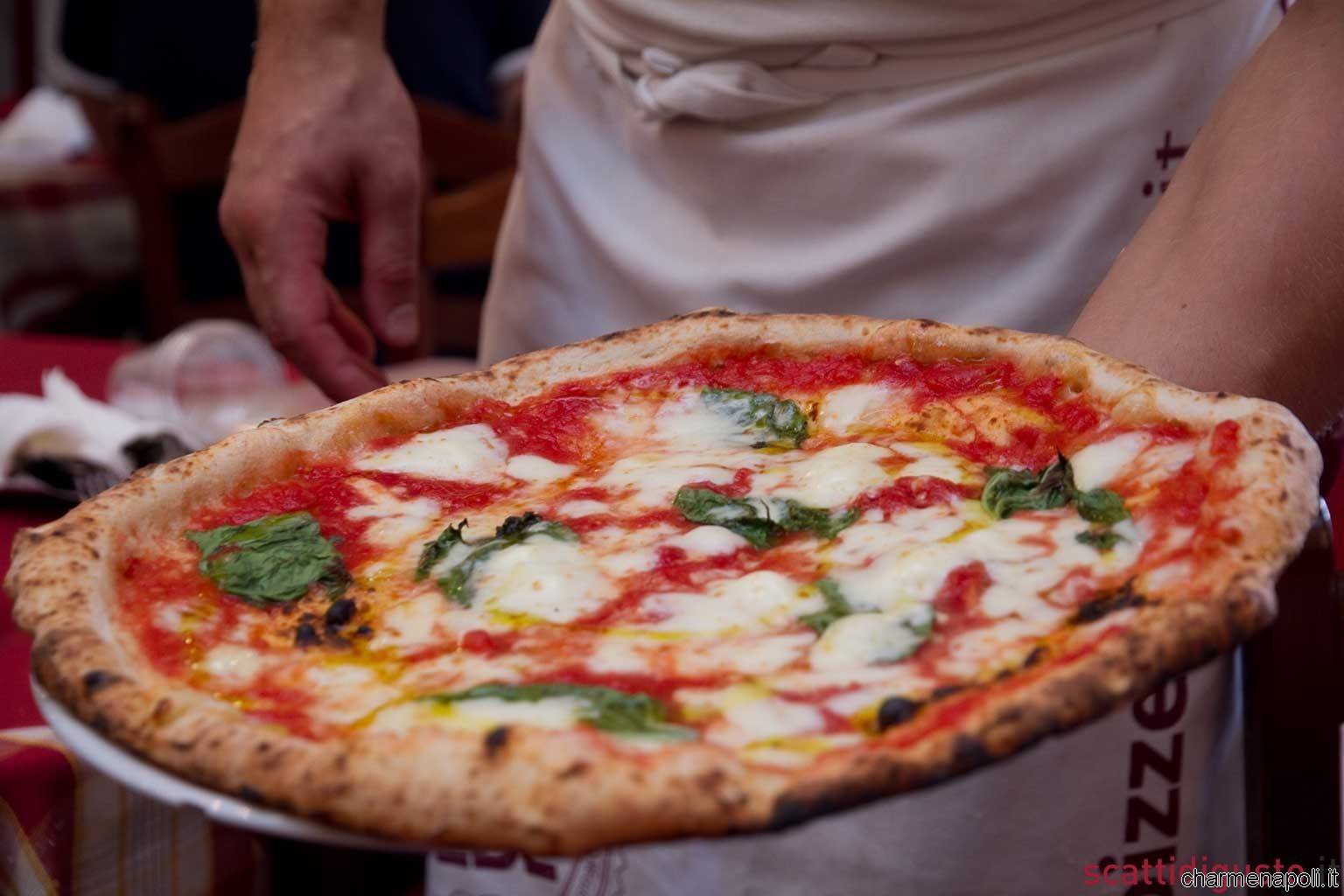 Tomato sauce, a drizzle of olive oil and a sprinkling of oregano and garlic or juicy mozzarella and basil, arranged on a fragrant dough base with a raised outer rim and cooked in a wood-burning oven  until the base is golden but still soft. The majestic Neapolitan pizza, pride of the city of the Siren Parthenope, has been awarded the Guaranteed Traditional Speciality label (Stg) by the EU. From February 2010, Neapolitan pizza is safe from culinary counterfeits now that rules have been drawn up on the characteristics that pizza must have if it is to deserve that name. All pizzerias that want to display the “Pizza Napoletana Stg” sign outside their premises will now have to sign up with the watchdog organisation empowered to verify compliance with the rules. Genuine Neapolitan pizza must have a soft, pliant base with a depth of almost 0.5 cm in the centre and a raised perimeter crust no higher than 2 cm. The dough must be “well raised and sufficiently cooked” so that it blends with the sharp taste of the tomatoes and the herbs and mozzarella used. The regulations specify the few ingredients needed. The flour must be type 00, mixed with brewer’s yeast and drinking water, and left to rise. The base must not contain air pockets, then the topping can be added and the pizza placed in the oven. Note that the topping must be made up of peeled plum tomatoes or fresh cherry tomatoes, sea salt (or table salt) and extra virgin olive oil poured from an appropriate oil jug in a spiral movement from the centre outwards. [charme-gallery]The real secret of a genuine Neapolitan pizza lies in the way the dough base is flattened and extended by hand – no rolling pins allowed! And only master pizza chefs learn the secret of an art that is shrouded in the mists of time. The word “pizza” comes from a vulgar Latin term dating back to the year 997, but it was in the 16th century that it was used to indicate a kind of flattened bread made predominantly inNaples by bakers in order to check that the oven was the right temperature. A little olive oil and mozzarella, and it could be eaten. However, the most famous pizza story is that of the Margherita. In June 1889, Italian Queen Margherita ofSavoy received a special pizza prepared by Raffaele Esposito in the Antica Pizzeria Brandi in the Spanish Quarters. It was less spicy than the typical Neapolitan pizza of the time and had the red, white and green of the Italian flag and instantly transformed the queen into one of the most famous characters of Neapolitan cuisine. However, the “pizza napoletana” was first seen between 1715 and 1725 when tomatoes from the Americaswere now a common ingredient in Europe and especially in the Mediterranean, where it was mixed with mozzarella, olive oil and other condiments. It was a poor man’s food, but the wealthy loved it too  and it soon became a dish in its own right. The first pizzerias opened in the mid 19th century and were only found in the city of Naples. Around the mid 20th century, pizzerias began to open in other towns aroundItaly and then spread throughout Europe andAmerica. The history of pizza is complete now that it has been awarded the Stg label, a guarantee of tradition that none can truly imitate.