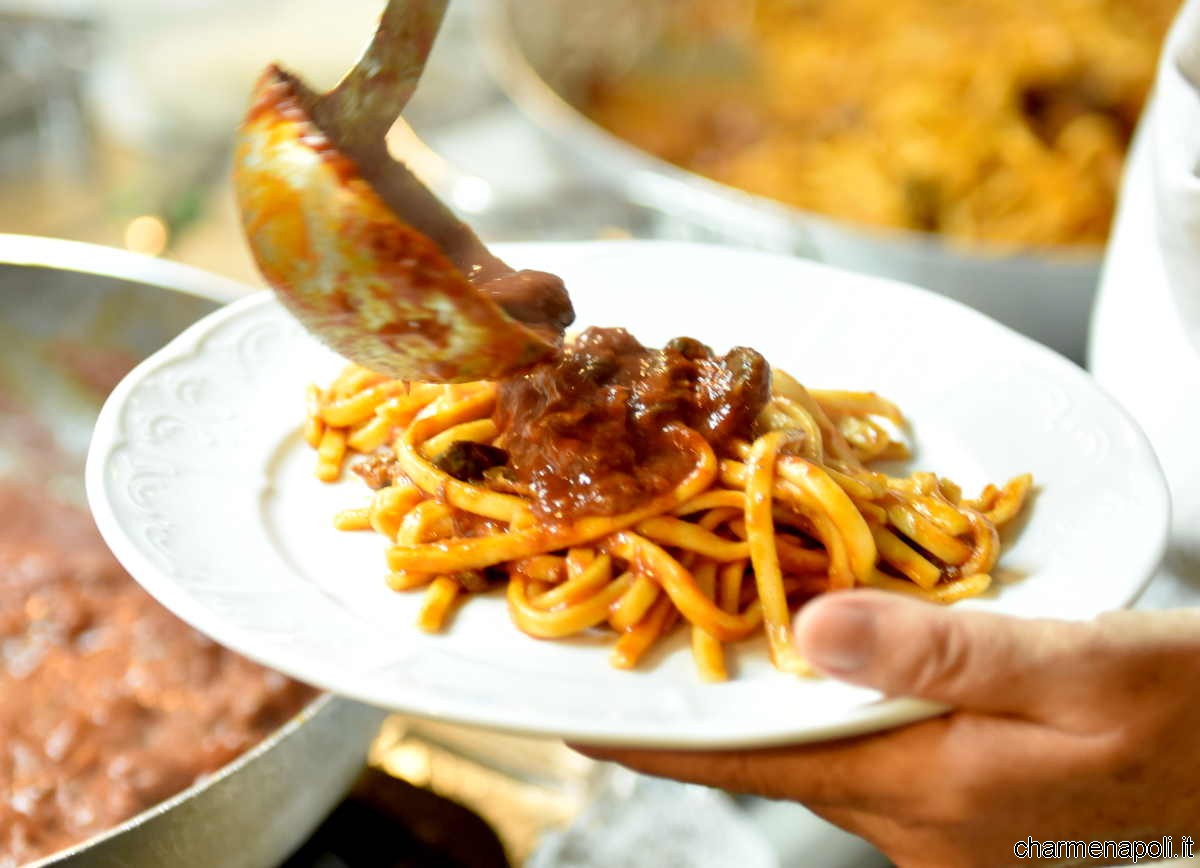 Gluttony poor daughter art of Neapolitan cuisine. Nothing had to be thrown. So here it is that all our pork offal, found their heyday at the table. Lung, trachea, heart and pig spleen are the protagonists together with a good dose of hot pepper, rosemary and bay leaves. We know a bit ‘his story.

The writer, Ulisse Prota Giurleo in a paper, with inspiration from a play by Pietro Signorelli, faithfully reflects the voices that gave the boys on the tavernas thresholds to attract and entice passers-by to the consumption of the food (including also the Tavernas of Cerriglio , neapolitan tavern apparently frequented by Caravaggio during his Neapolitan stay). We read what they said (neapolitan dialect):

Furthermore, the Giurleo, found on the back of a notarial instrument of 1743, a handwritten recipe tosciano, armed, apparently, the Royal Planet that, in total fidelity eighteenth century, he described the preparation:

“Get a pig’s lung, cut it into pieces and put it in a Cassarola to fry with inzogna (lard) plentiful, and if you like a sense of garlic and some Fronna (leaf) laurel. When one is well-browned add a couple of spoonfuls of canned peparoli (peppers), sweet red, to give them a nice color, and cerasielli (hot peppers in the shape of cherries) powder as you want, and give it the strong, adding a appropriate amount of water with salt or broth, and continue to cook over a low heat. If at first you did not place the Fronne laurel and want to give it flavor, put at this point a bunch of aromatic herbs, that Rosemary, sage, laurel, majorana and peperna. When you want to serve it, take these herbs and sprinkle it in the steaming dishes, bread crusts over. Etiam Majestati Planet. ”

The Prota Giurleo also assumed that the recipe was dictated by “Annella”, a famous Tavernara Porta Capuana, whose club was frequented by famous legal given the proximity to the Neapolitan court. And to confirm the status of some of the consumers of the fried, the last historical fact that we mention strengthens this hypothesis. The poet Salvatore Di Giacomo about a tavern, the Pagliarella del Vasto 65 (Vicaria district) wrote: “… Here was eating finer people, who raised to honors not imagined the suffritto …”

Let us now turn to the ingredients and the preparation of this special dish that you could eat with pasta (spaghetti, linguine or scialatielli as we did), or on the beautiful barbecued bread bruschetta.

Wash the offal, cut into small pieces and keep them for a couple of hours in fresh water, which  change occasionally, until they appear more blood. Drain and dry thoroughly all pieces of meat. In a tall, large pot, heat the lard and make the oil and then add the chopped giblets that you will cook on high heat. When it will be dried meat and will be slightly colored, add the wine and leave to evaporate. It ‘s time now for the concentrate, laurel, rosemary and pepper. Reduce the heat and simmer for 5 minutes and finally pour a few glasses of water because cooking should last a couple of hours. But beware. The sauce does not must ‘be too thick and therefore add, if necessary, further water (heated in a kettle to part and at the same time), and at the end the salt dosed. And the sauce is ready. How to taste it now? However you like. As well as written above. It is seasoning of a paste (we used scialatielli as you see in the picture), or spread on some nice bruschettone of bread on the grill. Of course, red wine is the accompanying table.