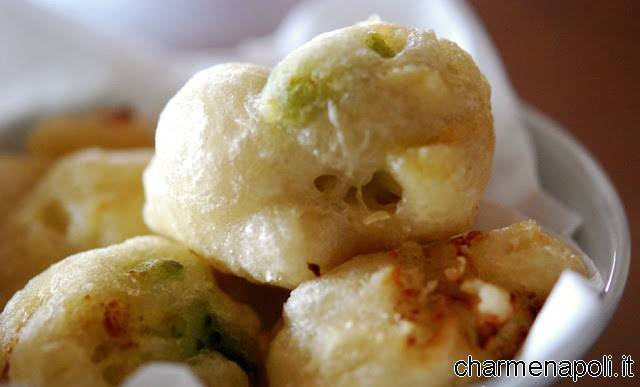 Zeppole and panzarotti are as Neapolitan as pizza, and any visitor to the city centre will have seen succulent delicacies fried on small carts in the narrow streets or in pizzerias, pubs and other eateries. The smell of frying is carried through the air and you are led by the nose to its source: zeppole, balls of flour, water and yeast a few centimetres in diameter which are fried and eaten immediately after being removed from boiling oil. Indeed, zeppola is also the Italian word to describe the speech impediment known as a lisp because those who mispronounce the letters ‘s’ and ‘z’ speak as if they had a hot zeppola in their mouth. Panzarotti, on the other hand, are small, thin potato croquettes without mozzarella, ham or breadcrumbs, which makes them lighter, and they too are eaten piping hot. So how is this tasty Neapolitan fast food made? Lets start with zeppole. [charme-gallery]First dissolve the yeast in warm water and mix with the flour and salt into a soft, sticky dough, then wait until it doubles in size. Use a wet spoon to form a ball that can be dropped gently into the abundant boiling oil and turn frequently until the outside is uniformly golden but not overcooked. Leave to drain on kitchen paper, add salt and enjoy. To make panzarotti, boil the potatoes for an hour, then peel and mash adding the salt, pepper, parsley and cheese. Mix the ingredients by hand (put some oil on the hands first) forming long narrow ‘sausage’ shapes rather than balls. Leave to dry on a cloth for 6-8 hours (they should be prepared in the morning to be cooked in the evening). Place in abundant boiling oil over a high heat. Like zeppole, they should be deep-fried and not turned or they may break. When golden, they should be removed from the oil and left to drain on kitchen paper for a few minutes then salted and eaten hot. If you place some of the panzarotto mixture inside the zeppola dough before frying, you will have a mouth-watering titbit that gourmets would die for.