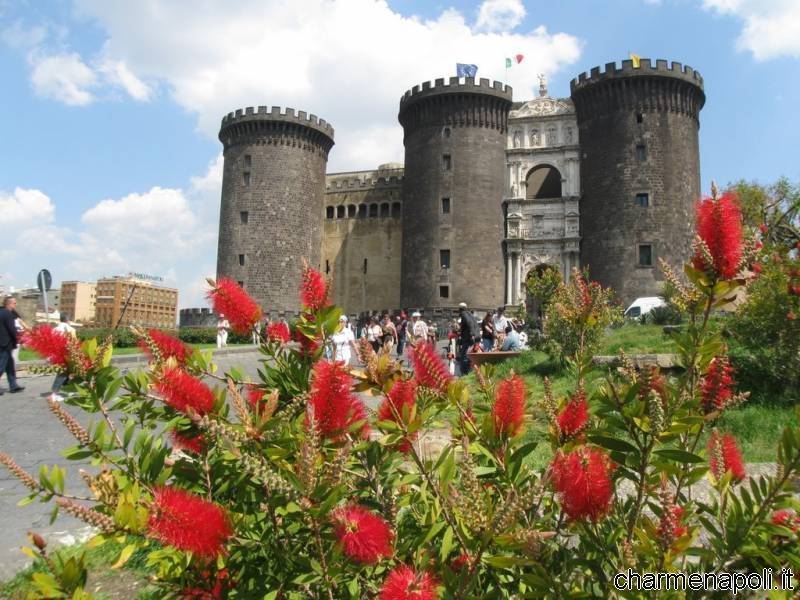 Feats of arms, sieges and forts. Strongholds of stone, royal residences. The history of Naples and his castles begins a long time ago. Since the ancient kings of Parthenope chose to lodge here at the foot of Vesuvius. They fortified the city chosen as the capital of the Kingdom with a solid defensive system whose foundations rested on the remains of villas and strongholds of ancient Rome. Since Castel dell’Ovo, built on the foundations of an ancient patrician residence. Until the most famous castle of Naples: the Angevin Male. “Castrum Novum”, as it was originally called by the rulers of the house of Anjou to distinguish it from the oldest Ovo and Capuano castles, is immense. Wonderful. More than a castle. A true citadel where extraordinary events once occured: from the historic “refusal” of a Pontiff, to the immediate acclaim of his successor; from the disappearance of prisoners at the hands of a monstrous crocodile, which was believed to be kept hidden in the bay of the manor by the queen Giovanna, to the killing of the lovers that the lustful sovereign would push through a trap-door into the mysterious Millet Ditch.

New Castle, popularly referred to as Angevin Male, is now one of the recognized symbols of Naples in the world, since most of Neapolitan history is intertwined with the history of the fortress. Built in 1279 at the behest of Carlo I of Anjou, it was the royal residence of the transalpine family and home to a court by the intense cultural and political activity.

In 1294 the Maior Hall of the fortress was fisrt the scene of a great refusal – as Dante would say – when Pope Celestine V abdicated the papacy on December 13. Then of the celebration of a new pope: Bonifacio VIII. Even the Aragonese, the successors of Anjou, made the “Male” the place of their political and cultural power. Indeed, the new king of Naples took possession of the kingdom with the conquest of the fortress, celebrated with the majestic marble triumphal arch that crowns the entrance, whose vaults evoke, through bas-reliefs and sculptures, the moment when Alfonso the Magnanimous (June 12, 1442 ) was able to conquer the castle.

In 1486, in the “Hall of the Barons”, the epilogue of the famous conspiracy of the barons took place. Several nobles of the kingdom, led by Antonello II Sanseverino, Prince of Salerno, and Francesco Coppola, Count of Sarno, plotted against King Ferdinand I, son of Alfonso. Sensed deception, the king invited them all in the room on the pretext of sealing the peace with a wedding banquet. The barons came all together, but the king, having ordered his soldiers to barricade the doors of the room, had them all arrested, then condemning many of them, including Coppola and sons, to death.[charme-gallery]

New Castle, during its centuries-long history, has been used several times as a residence to host renowned people who stayed in Naples as guests of the royal court or on official visit to the city. These include Giovanni Boccaccio, Giotto (who left traces of his presence in the pictorial cycle, largely now lost, of the Palatine Chapel) and Francesco Petrarca.

Ended its function as a “control center”, the Angevin Male, with its mighty towers, is currently intended for a cultural use and is, among other things, the seat of the Civic Museum of New Castle. The tour of the museum includes the Armoury Hall, the Palatine Chapel (also known as Santa Barbara), the first and second floor of the southern courtyard and finally the Carlo V Hall and the Lodge Hall designed to host exhibitions and cultural initiatives.