Home History Not only the Greeks and Romans, the Campania of other peoples 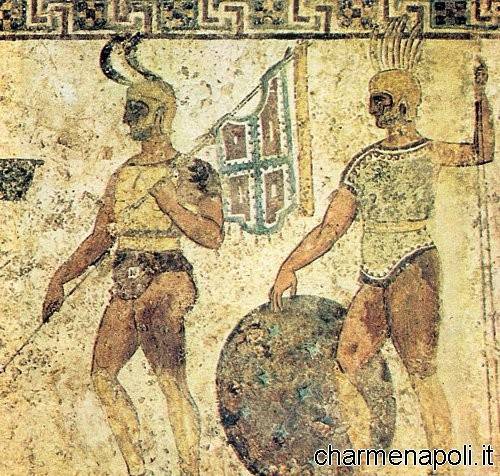 Campania was a land of conquest not only for Greeks and Romans but also for other peoples who spent the winter in the green valleys and lush pastures of this fertile land, founding towns, leagues and small empires. The Oscans, Etruscans, Samnites and Lucani were fierce tribes who endured the fury of the winds and the barren mountains, marking their new conquests with blood from the 1st millennium BC up to the 5th century AD. Atripalda, Montesarchio, San Salvatore Telesino and Benevento in Campania, Isernia in Molise, and Alfedena in Abruzzi. Six towns in three different regions were all founded by the Samnites, an Italic warrior tribe who occupied whole territories long before the Romans came on the scene. The Irpini who colonised Abellinum were Samnites, as were the Caudini who subjectedRometo one of its greatest defeats and Samnite warriors later made up the core of the toughest Roman legions once their rebellious spirit had been tamed. The Samnites were the thorn inRome’s side for half a century and the proud mountain warriors long resisted the pax romana. Pontius Pilate, is said to have been of Samnite origin. Statues, tombs and manufactured items are all that now remains to indicate they were ever here, and the towns they founded preserve little evidence of their presence. Ruined fortifications on MountAceroare all that is left of ancient Telesia (San Salvatore Telesino), which the Romans turned into a thriving colony. [charme-gallery]Caudium (now Montesarchio) was razed to the ground to avenge the Roman’s humiliating defeat at the Battle of the Caudine Forks, although some vases and ornaments from the 7th century BC are now on show in the Benevento Sannio Museum and the Sannio Caudino National Archaeological Museum in Montesarchio. The capital of the Samnite League, Maloenton (Benevento) was captured by the Romans who Latinised its name into Malaventum (evil wind) and then changed it to the more auspicious Beneventum (good wind) following their victory over Pyrrhus. It later became one of the wealthiest towns in the Empire, rivalling evenCapua andRome for its beautiful monuments and public works. Its warriors remained fierce but the town was Romanised down to the last stone. Some pottery and bronzes in the local museum are the only evidence of the Samnite presence. However, Campaniawas also a power base for Etruscan tribes from the beginning of the 1st millennium BC when Southern Etruria flourished and they founded Capua (the name ‘Campania’ is derived from ‘Capuania’) and Pontecagnano, but also Pompeii, Nola, Atella, Nocera, Salerno, Fratte, Herculaneum and Vico Equense. [charme-gallery]An important trading town, Capua is the best local example of the powerful Etruscan civilisation. Numerous bronze vases and beautiful statues from their necropolises, a beautifully decorated plate and a Mater Matuta sculpture are on display in the Capua Provincial Museum.  Etruscan power declined in the 6th century BC as the Samnites’ military might grew and the Greek settlers in Cuma repeatedly defeated Etruscan fleets in theTyrrhenian Sea. The Lucani were an Italic people who colonised southern Campaniaand much of Basilicata, founding Atena Lucana and Potenza. The Lucani were constantly at war with the colonies of Magna Graeciaand, one by one, all the Greek coastal settlements were conquered by the Lucani. They captured beautiful Posidonia and renamed it Paistom (Paestum), but were unable to take Velia. Like their Samnite allies, the Lucani eventually paid a high price when they were defeated byRome. The historian Strabo described them as “utterly insignificant, with no political organisation and outdated language, weaponry and clothing”. However, the culture of the Lucani did not disappear entirely. In the 1950s, archaeological digs in Salerno province unearthed 2000 relics, the 600 finest of which are now on display in the Western Lucania Provincial Archaeological Museum: Iron Age tombs, coins, buckles, a splendid silver ring with an engraving of Eros, a Balkan kantharos, fragments of  mosaics, columns, statues and burial items offer a precious overview of 16 centuries of history.