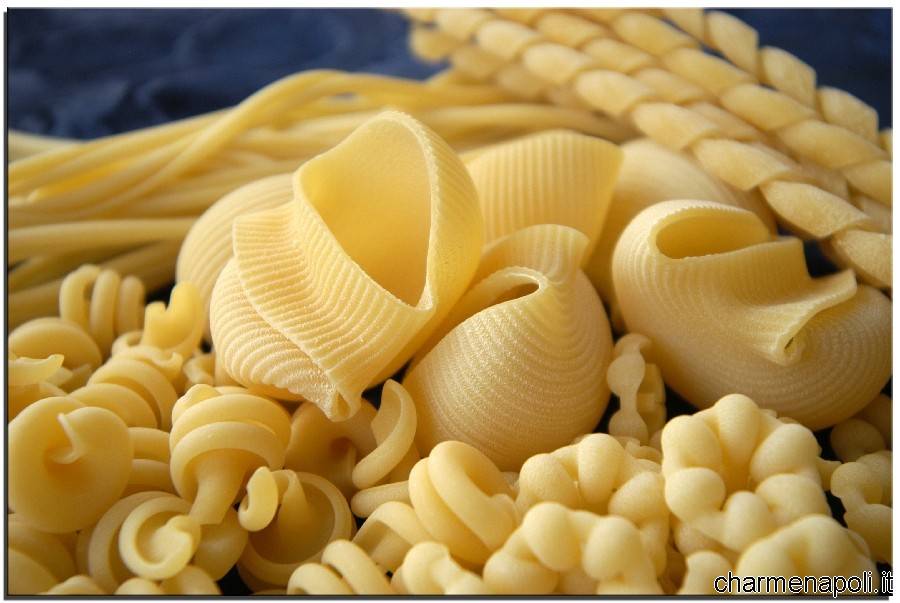 Pasta is synonymous with tasty Mediterranean cuisine and is inextricably linked to the town of Gragnano in the Lattari mountains. The late 16th century saw the first family-run pasta workshops open here and by the mid 17th century the majority of the town’s inhabitants were involved in maccaroni manufacture because the warm, moist wind blowing down to the Bay of Naples, allows the pasta to dry slowly here ensuring a longer storage life. Gragnano enjoyed its heyday in the 19th century with the opening of large pasta factories, whose specialities were hung out to dry in the streets, as can be seen in famous period photographs of Via Roma. Production doubled following the unification of Italy in 1861 because Gragnano pasta was now exported to Turin, Florence and Milan and sales reached their peak at the turn of the century. In the 20th century, the industry was modernised but Gragnano’s production was hit by the outbreak of world war II, competition from northern Italian manufacturers, and finally the 1980 earthquake. Only 8 factories then remained but numerous small businesses flourished, ready to face the challenge of the new Millennium. Despite its troubled past, Gragnano continues to be “pasta town” and manufacturers aim at the high end of the market with the best durum wheat, bronze dies which enable a slow, low-pressure process, and a slow, natural drying process to conserve the wheat’s flavour and nutritional properties. Tourists now come to Gragnano from all over the world for the town’s special gourmet itineraries and its pasta is safeguarded by a consortium which promotes its qualities and organises a yearly festival evoking times when the streets were full of spaghetti hanging out to dry.[charme-gallery] Pasta comes in many different shapes: maccheroni, tofette, rigatoni, paccheri and mezzi paccheri – Gragnano’s most famous speciality – fusilli, pennette, tortiglioni and mezzanielli, to name only the best known varieties from the Lattari mountains. And each region of Italy has its own favourite as some shapes are better suited to certain sauces. For instance, trofie and linguine are ideal for pesto alla Genovese while short mixed Gragnano pasta seems made for pasta and potato soup and bucatini go perfectly with amatriciana sauce Pennette, ziti, calamari, fusilloni, mezze righe, maccheroncelli and spaghetti are other shapes made by the pasta masters of Gragnano for the local population as dried pasta is a key feature of Neapolitan cuisine and traditional stories abound on their origins: mafaldine were created in honour of Mafalda of Savoy, tripolini were dedicated to colonial Italy’s conquest of the Libyan capital and piedigrotta pasta is said to be named after the Neapolitan festival. Legends also surround pasta sauces, like the typically Neapolitan (apart from the name) Genovese sauce which was said to have first been made in the 15th century by chefs from Genoa staying at an inn in Naples. Gragnano boasts hundreds of pasta recipes, as do other towns throughout Italy: hot or cold, with vegetables, meat or fish, ‘dry’ or in soup, simple or lavish, traditional or creative; but the key ingredient is the pasta which must be prepared by following the traditional recipe to the letter. So, buon appetito!