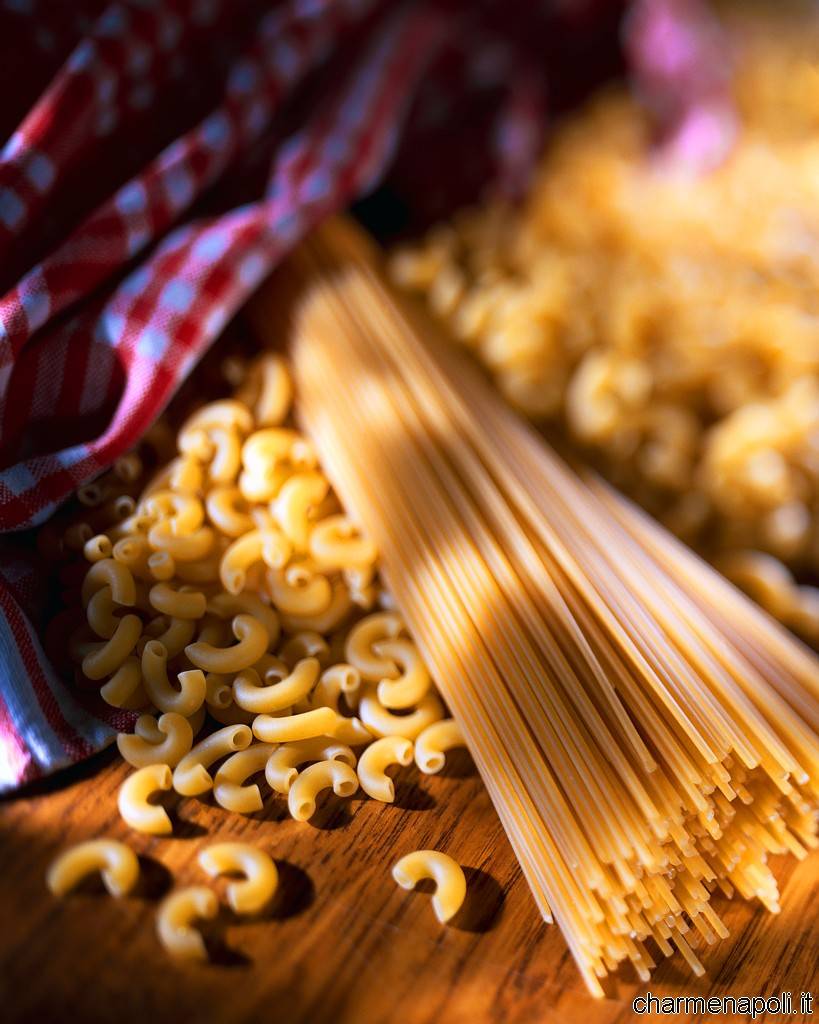 Tasty, easy to prepare, light on the stomach and, once you’ve tasted it, you’ll never be able to live without it. More of a myth than a mere name, pasta is an essential guest at any dinner table and is  usually associated with Campania, where the production of ziti, pennette and other macaroni is an art: what could be better than Gragnano paccheri with their sauce-capturing texture or Neapolitan mezzanelli with ragù sauce? In the former Kingdom of the Two Sicilies, from the Lattari mountains and Torre Annunziata to the Caserta countryside and Naples itself, the pasta-maker’s art has created countless culinary masterpieces over the centuries, thanks to the dry, breezy climate around Mt. Vesuvius which is ideal for the production of pasta. However, maccheroni are not just an emblem of Naples, they have even played a part in its history, such as at the dinner organised by Eugenie de Montijo, Empress of France and wife of Napoleon III. This was attended by Prime Minister Cavour’s secretary Costantino Nigra who had been sent to Paris to discuss an alliance between Sardinia and France against Austria and so complete the unification of Italy and, in a sort of theatrical sketch, the court chamberlain dressed as Cavour sat at a table laid with various dishes alluding to the political situation of the different Italian regions: gorgonzola (Lombardy), parmesan (duchy of Parma), mortadella sausage (Emilia) and oranges (Sicily). The chamberlain ate everything but refused the plate of maccheroni saying he had had enough. Nigra reported the scene to prime minister Cavour who immediately understood that France was prepared to give up Sicily but not Naples. “Clearly the pasta isn’t ready yet”, replied Cavour and sent the army to conquer the rest of the south and, when it reached Naples, he announced “the pasta is now ready and we are going to eat it”. Campania and pasta have thus lived side by side thanks to the warm offshore breezes which caressed the spaghetti left hanging out to dry in the streets, as can be seen in period photographs taken in Torre Annunziata and Gragnano. [charme-gallery]Of course history books tell us that the Roman chef Apicius mentions something like lasagne in the 4th  century AD, that the Etruscans ate this special food, that Marco Polo brought noodles back from China or that “makkaroni” was an Arabic dish imported into Sicily. Be that as it may, the 17th century marked the beginning of the Neapolitan pasta industry with the invention of the first mechanical press. The city ruled by the viceroys was rife with pestilence and revolts among the hugely increased population, many of whom could not get enough to eat. The mechanical press allowed pasta to be made cheaply, then dried naturally in the sea breeze and stored for future consumption. This revolutionised the Neapolitans’ diet and their famous maccheroni were even mentioned in a poem by Latin lover Giacomo Casanova in 1734. The next milestone in the history of spaghetti was in the early 19th century when pasta met its ideal partner: the tomato. Tomato plants had been imported into Spain from the New World by the Conquistadores in the 16th century and gradually spread throughout the Mediterranean, flourishing especially in the plains around Mt. Vesuvius where tomatoes became an essential ingredient in exquisite sauces. Boiled with a little salt and some basil leaves, the sauce was soon to be found on pizzas and maccheroni all over southern Italy, transforming Naples into the world pasta capital. In 1840, a pasta factory was opened in Torre Annunziata, where a Swiss businessman Voiello would further expand the industry with watermills along the river Sarno turning grindstones to make flour which was then separated from the bran by skilled workers using large sieves. [charme-gallery]Pasta exports soared as high-speed sailboats bore it across the Atlantic to conquer America, but competition was growing at home, principally in nearby Gragnano where a product similar to macaroni had been made since the 16th century and the pasta manufacturing industry had grown constantly, employing almost 75% of the population by 1861. In 1885, Gragnano was given a rail connection which facilitated movement of employees and above all wheat, semolina and pasta. Around 1880, the industrial revolution upgraded the entire manufacturing process with the introduction of a mechanical sifting machine to increase the flour yield and the first hydraulic presses and steam mills. At the same time, new dies meant that over 200 new and different shapes of long and short pasta were being made in Campania, and it wasn’t long before lasagne, ziti, penne, vermicelli and spaghetti from Gragnano and Torre Annunziata were eaten almost all over the world. Today, many of the 180 Italian pasta manufacturers are still located in Campania and especially in the provinces of Naples, Caserta and Salerno where pasta is a key feature of traditional cuisine, but by the early 20th century, artificial drying techniques allowed pasta manufacture to spread across the nation, becoming a worldwide symbol of quality made in Italy.