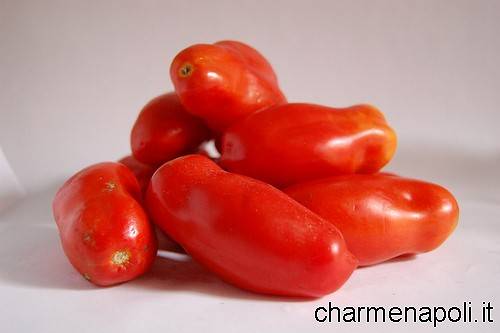 For 200 years it has made Campania’s cuisine unique. As red as the lava that formed the volcanic soils in which it grows, the San Marzano tomato is the descendant of the first plants brought to Europe from the New World in the 16th century. The first seeds are said to have reached Italy in 1770, a gift from the Kingdom of Peru to the Kingdom of Naples, and were planted in the fields around San Marzano sul Sarno, hence the name. The red sauce made from the fruits of this legendary plant is a gourmet’s delight and an essential ingredient in Campania’s kitchens where, lavished onto pasta from Gragnano and Torre Annunziata, it provides the unmistakeable fragrance for Sunday lunch. The San Marzano reached its zenith in the early 20th century when the first tomato processing industries began canning peeled plum tomatoes that had been lovingly grown and carefully prepared. The San Marzano is cultivated in about 40 localities in the plains around Mount Vesuvius and in Avellino province: over 16,000 hectares where this tomato thrives thanks to the ideal climate and volcanic soil. Traditionally, San Marzano plants are tied to stakes so that the tomatoes never touch the ground before being harvested – an operation still performed by hand despite the availability of modern technology. [charme-gallery]Walking through a field of mature San Marzano plants is a unique sensorial experience: the spellbinding fragrance of ripe and green tomatoes, mown grass and spices is overwhelming. The San Marzano has a typically elongated shape with parallel depressions on each side, few seeds or fibres and its bright red peel can be easily removed to leave a sweet yet sharp-flavoured pulp, making it one of the most famous vegetables around the world, where it is exported both fresh and canned. The dishes that best bring out the qualities of San Marzano tomatoes are the simplest ones, such as in a spaghetti sauce or as a fragrant topping on pizzas, but also in fish dishes or on a plain bruschetta so that its exquisite aroma can titillate the taste buds. And its goodness can also be savoured when sun-dried. This is not just the opinion of gourmets, but also of International institutions like the European Union, which awarded the San Marzano tomato the protected denomination of origin label (Dop) in 1996. The symbol of the agricultural produce and the people of Campania, this humble vegetable is the ‘king’ at the dining table where it is acclaimed by all and sundry A tomato from a small town that has conquered the world with the familiarity and joy of a dinner table set with plates glistening with bright red gold.