Home Flavours The resurrection of taste at the table, his majesty pastiera. Here, her... 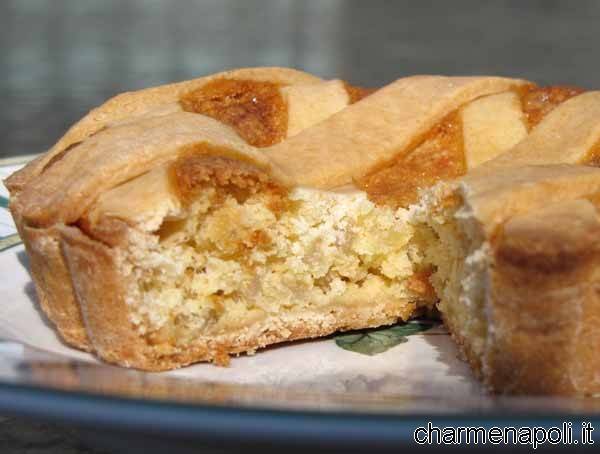 There is no Easter in Naples without taking his majesty pastiera. And just to sweet symbol of the feast of the resurrection and its ancient origins, we dedicate this article.

For those who do not know, the origins of the most irresistible delicacies of the Easter date according to an old legend, the myth of the mermaid Partenope own. Yes, that’s the muse “founder” of the city of Naples, which he chose as his residence the rocks and cliffs of Punta Campanella, an extreme offshoot of the beautiful bay, where the queen of the sea sang with a melodious voice and sweet, in a desperate attempt to seduce brave Ulysses.

According to tradition, the people, kidnapped by this wonderful and enchanting song, thought it well to bring the seven gifts, each of which had a precise meaning. The flour symbolized wealth; ricotta abundance; the eggs were a symbol of reproduction; wheat cooked in milk , was the emblem of the merger of the animal kingdom with the vegetable; orange flowers evoking the scent of Campania; spices were meant as a sign of homage a bit ‘ all the peoples of the Mediterranean and finally the sugar for the sweetness of singing praise of the creature of the deep.

So the beautiful Partenope, to collect all the gifts received, mixed them in his hands that turned into an amalgam, as if by magic, in the first pastiera history. One of which was then she found the unwitting author. So much for the legend, because they are many and other legends associated with this ancient culinary recipe that you want derived from a type of votive offering in the spring of pagan times, perhaps linked to the cult of Ceres, and then passed in the Christian tradition, was perfected in the convents became famous especially in that of the nuns of the convent of San Gregorio Armeno.

However, speaking of anecdotes and “fattarielli”, there is one in particular that deserves to be remembered. It is said, indeed, that Maria Theresa of Austria,  wife of the King of Naples, Ferdinand II of Bourbon, nicknamed “the Queen who never smiles”,  yielding to the entreaties of the greedy husband, agreed to taste a slice of pastiera and could not help less than finally let go with a smile. It seems that at this point the king exclaimed satisfied:
“To bring a smile to my wife wanted pastiera ! Now I’ll have to wait until next Easter to see her smile again”.

Finally some pearls of wisdom on a treat made of pastry dough stuffed with ricotta, candied fruit ,sugar, eggs and wheat boiled in milk (but there is also a variation in the Salerno obtained with rice instead of wheat ). A bounty of crisp pastry and the soft filling, whose scent (and taste) changes depending on the spices and flavorings (cinnamon, candied orange peel, vanilla and orange flower water) used during preparation.

The housewives say , in fact, that there is a useful “trick” to recognize a good pastiera from a botched “must have the tear”, which must be sufficiently moist to note that a droplet falls cut the first slice. It is only to be trusted. Good “abboffata” of Easter to everyone!