Home News Free tours in the museums of Campania for the celebration of May... 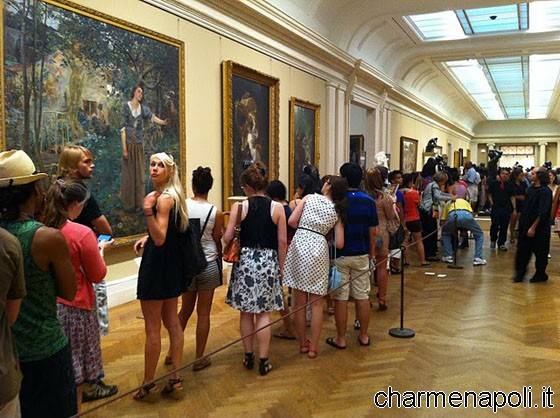 On the occasion of May 1st , the day dedicated to all workers , including state museums taking part in the festivities, thanks to the initiative promoted by the Ministry of Culture which provides free tours for tourists and citizens who want to explore the cultural sights of their city. Among these could not fail to respond Terra Felix that tomorrow will showcase its major tourist attractions.

But we see in detail the program by 1 May. And let’s start from Benevento, where you can admire the impressive Roman theater, the ancient building dating back to the second century and was built during the reign of Emperor Hadrian.
Still, always staying near the Apennines hinterland of Campania, we point out another interesting destination: the former Bourbon prison of Avellino from the original hexagonal structure,designed by De Fazio, with the consent of King Ferdinand I and realized in 1832 in the capital of Irpinia, now the headquarters of the Superintendent of BAP Irpino Avellino and the new Museum of the Risorgimento.

But it did not end there, because to throw open its doors will also be the ancient Domus Via degli Orti in Santa Maria Capua Vetere (the ancient Capua), a precious example of the Roman house, where they are still perceivable traces of the original structure.
We now move from the Vesuvian area and specifically in Pompeii, for a tour of the ancient archaeological excavations and the typical Roman houses buried by the eruption of Vesuvius in 79 AD and then brought to light in modern times.

And once in place, must is the archaeological site of Oplonti ,a few miles from Pompeii, in what today is the center of the modern town of Torre Annunziata ,and what was once the Roman city of Oplontis, buried for much of the rubble volcanic explosion of Vesuvio, but for which you have retrieved impressive testimonials and lush as the extraordinary patrician villa of Poppea and the rustic villa not far Lucius Crassius Tertius.

Another day, another race! This time we stopped in the charming Blue Island, admiring the unparalleled beauty of the Carthusian Monastery , the oldest monastery in Capri, whose foundation dates back to the second half of ‘300, as evidenced by the remarkable fresco above the portal of access to the church.

Let us now return to the city of siren Partenope and discover the routes that we reserve the beautiful Naples.
It starts with the National Archaeological Museum, then continue with the Museum of San Martino and so the view at Castel Sant ‘Elmo,  where you can admire the magnificent view of the Gulf.
And to keep us company in this day of celebration, will also be the majestic halls of the Royal Palace, the Museum of Villa Pignatelli and the monumental complex of the Girolamini remember that includes the solemn church, the picture gallery and library.
This and much more will be open free of charge during the day tomorrow. Just an opportunity not to be missed!

State museums with free admission to the 1st of May
1 May 2014 , complete program on:http://www.beniculturali.it/mibac/export/MiBAC/sito-MiBAC/Contenuti/MibacUnif/Comunicati/visualizza_asset.html_984356857.html